At the end of this module, you should be able to write Cypher WHERE clauses for testing:

You have learned how to specify values for properties of nodes and relationships to filter what data is returned from the MATCH and RETURN clauses. The format for filtering you have learned thus far only tests equality, where you must specify values for the properties to test with. What if you wanted more flexibility about how the query is filtered? For example, you want to retrieve all movies released after 2000, or retrieve all actors born after 1970 who acted in movies released before 1995. Most applications need more flexibility in how data is filtered.

Previously, you learned to write simple query as follows:

Here is a way you specify the same query using the WHERE clause:

Not only can the equality = be tested, but you can test ranges, existence, strings, as well as specify logical operations during the query.

Here is an example of specifying a range for filtering the query: 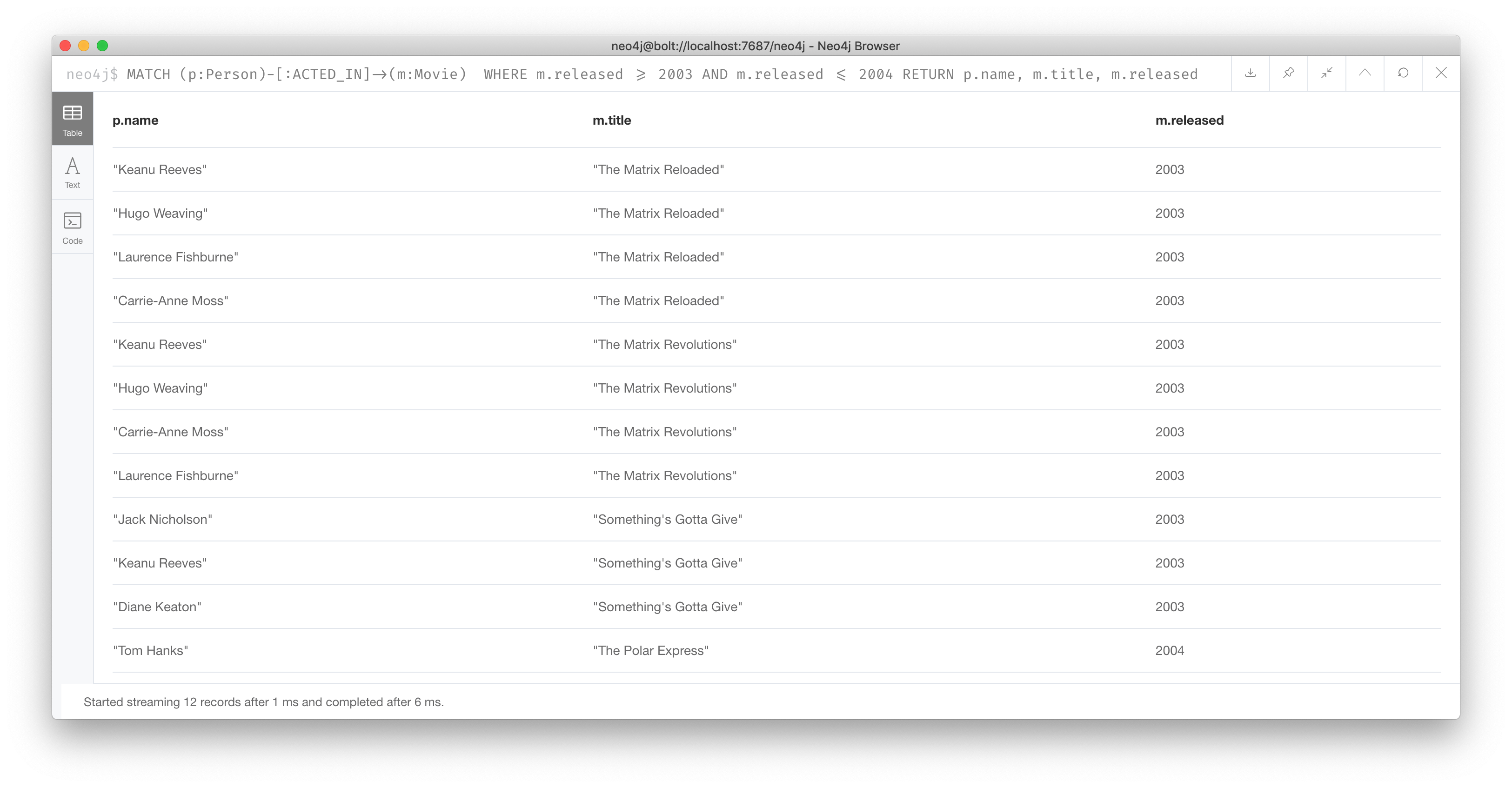 You can also specify the same query as:

You can specify conditions in a WHERE clause that return a value of true or false (for example predicates). For testing numeric values, you use the standard numeric comparison operators. Each condition can be combined for runtime evaluation using the boolean operators AND, OR, XOR, and NOT. There are a number of numeric functions you can use in your conditions. See the Neo4j Cypher Manual’s section Mathematical Functions for more information.

A special condition in a query is when the retrieval returns an unknown value called null. You should read the Neo4j Cypher Manual’s section Working with null to understand how null values are used at runtime.

Thus far, you have used the node labels to filter queries in a MATCH clause. You can filter node labels in the WHERE clause also:

For example, these two Cypher queries:

can be rewritten using WHERE clauses as follows:

Here is the result of running this second query:

Not all node labels need to be tested during a query. If your graph has multiple labels for the same node, filtering it by the node label will provide better query performance.

Testing existence of a property

Recall that a property is associated with a particular node or relationship. A property is not associated with a node with a particular label or relationship type. In one of our queries earlier, we saw that the movie “Something’s Gotta Give” is the only movie in the Movie database that does not have a tagline property. Suppose we only want to return the movies that the actor, Jack Nicholson acted in with the condition that they must all have a tagline.

Here is the query to retrieve the specified movies where we test the existence of the tagline property:

Cypher has a set of string-related keywords that you can use in your WHERE clauses to test string property values. You can specify STARTS WITH, ENDS WITH, and CONTAINS.

For example, to find all actors in the Movie database whose first name is Michael, you would write:

Note that the comparison of strings is case-sensitive. There are a number of string-related functions you can use to further test strings. For example, if you want to test a value, regardless of its case, you could call the toLower() function to convert the string to lower case before it is compared.

See the String functions section of the Neo4j Cypher Manual for more information. It is sometimes useful to use the built-in string functions to modify the data that is returned in the query in the RETURN clause. 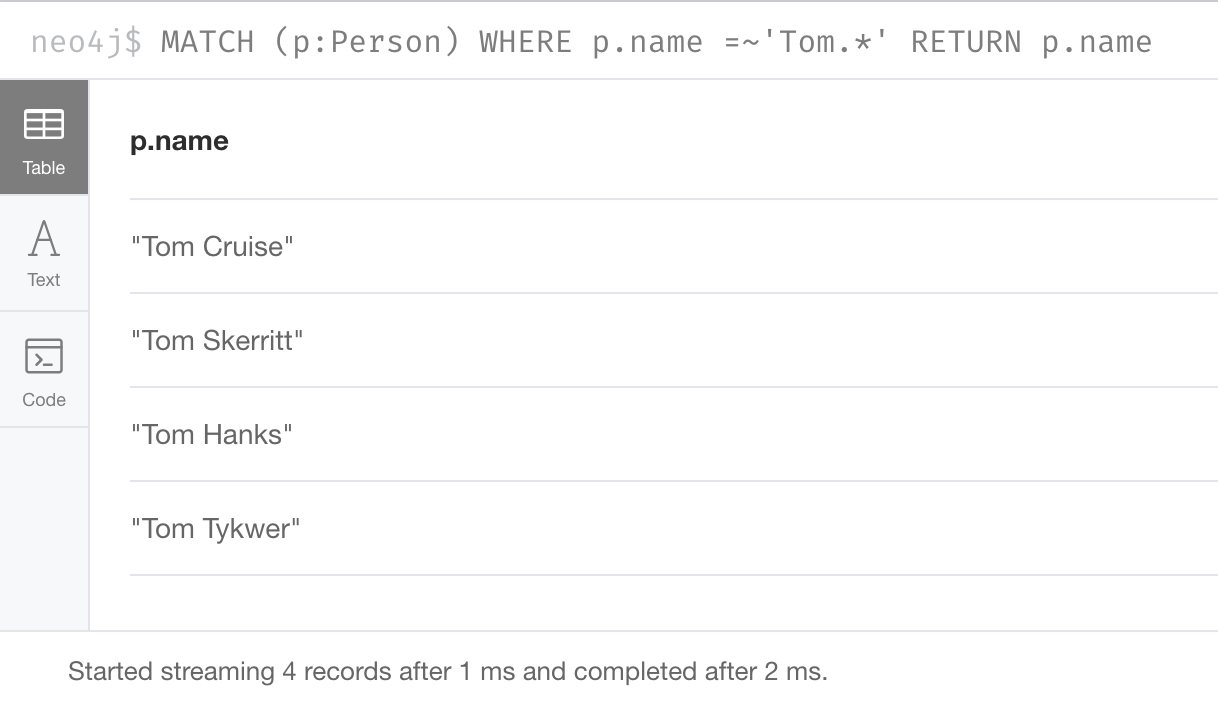 Sometimes during a query, you may want to perform additional filtering using the relationships between nodes being visited during the query. For example, during retrieval, you may want to exclude certain paths traversed. You can specify a NOT specifier on a pattern in a WHERE clause.

Here is an example where we want to return all Person nodes of people who wrote movies: 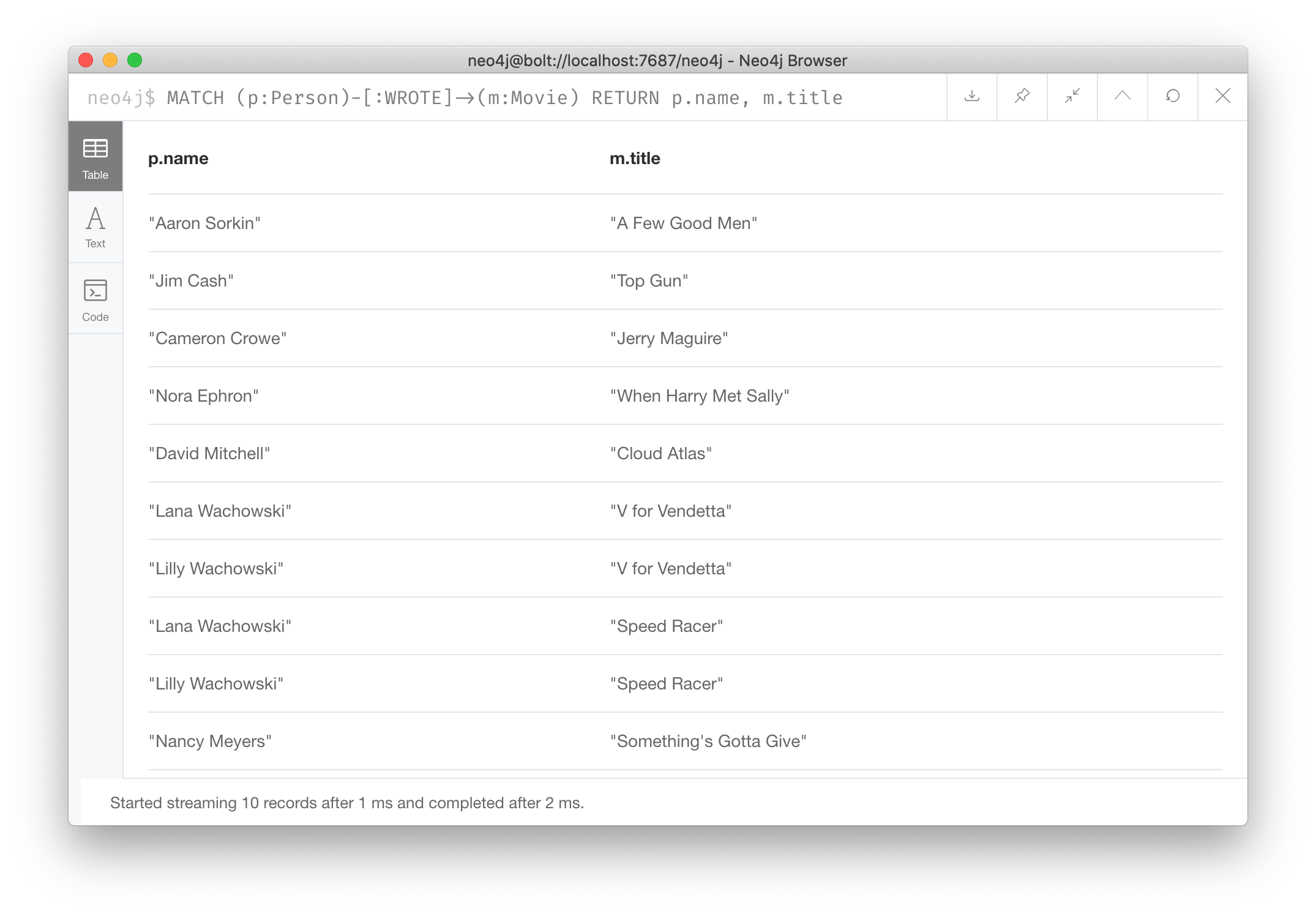 Next, we modify this query to exclude people who directed that particular movie:

Here is another example where we want to find Gene Hackman and the movies that he acted in with another person who also directed the movie. 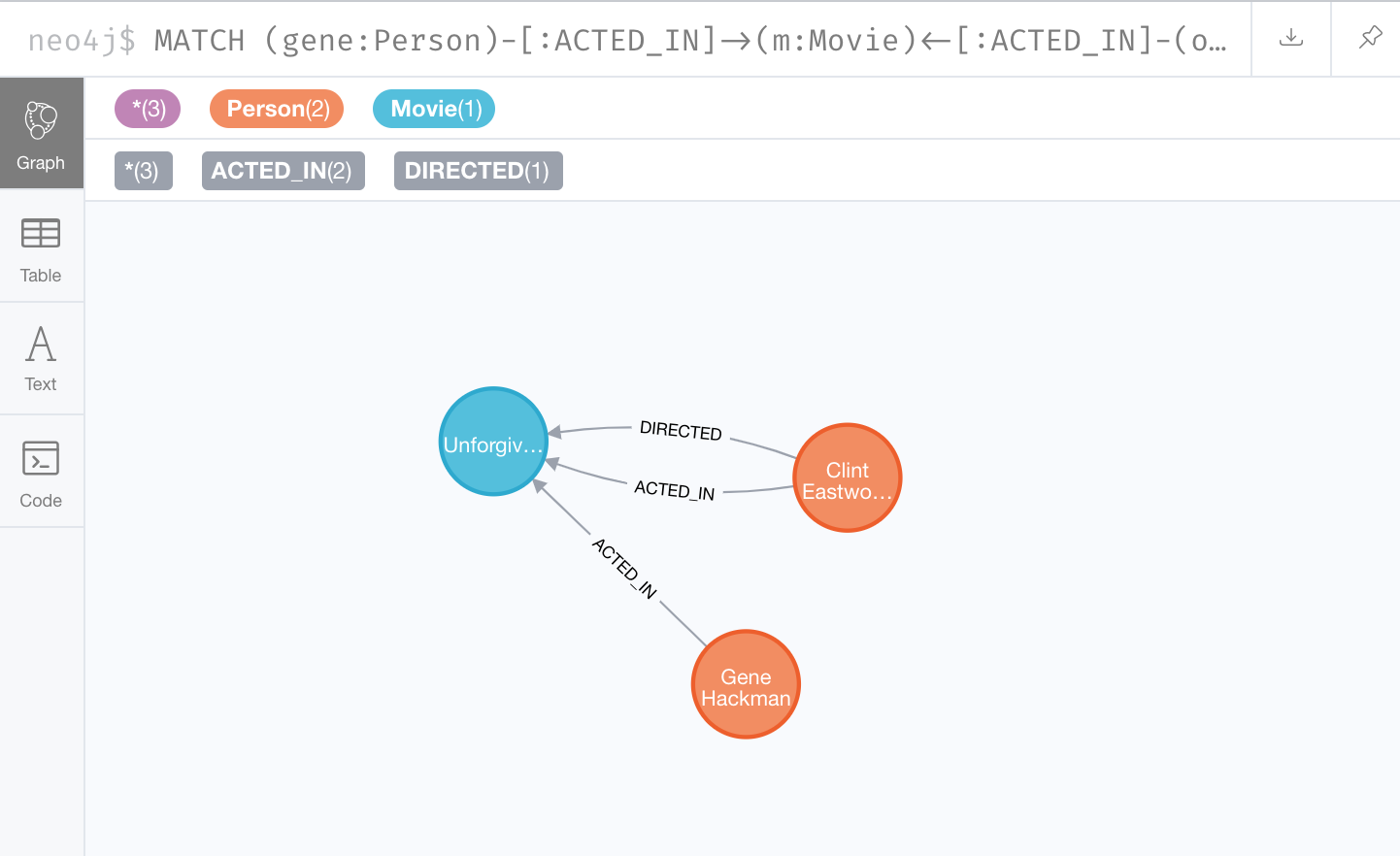 If you have a set of values you want to test with, you can place them in a list or you can test with an existing list in the graph. A Cypher list is a comma-separated set of values within square brackets.

You can define the list in the WHERE clause. During the query, the graph engine will compare each property with the values IN the list. You can place either numeric or string values in the list, but typically, elements of the list are of the same type of data. If you are testing with a property of a string type, then all the elements of the list should be strings. 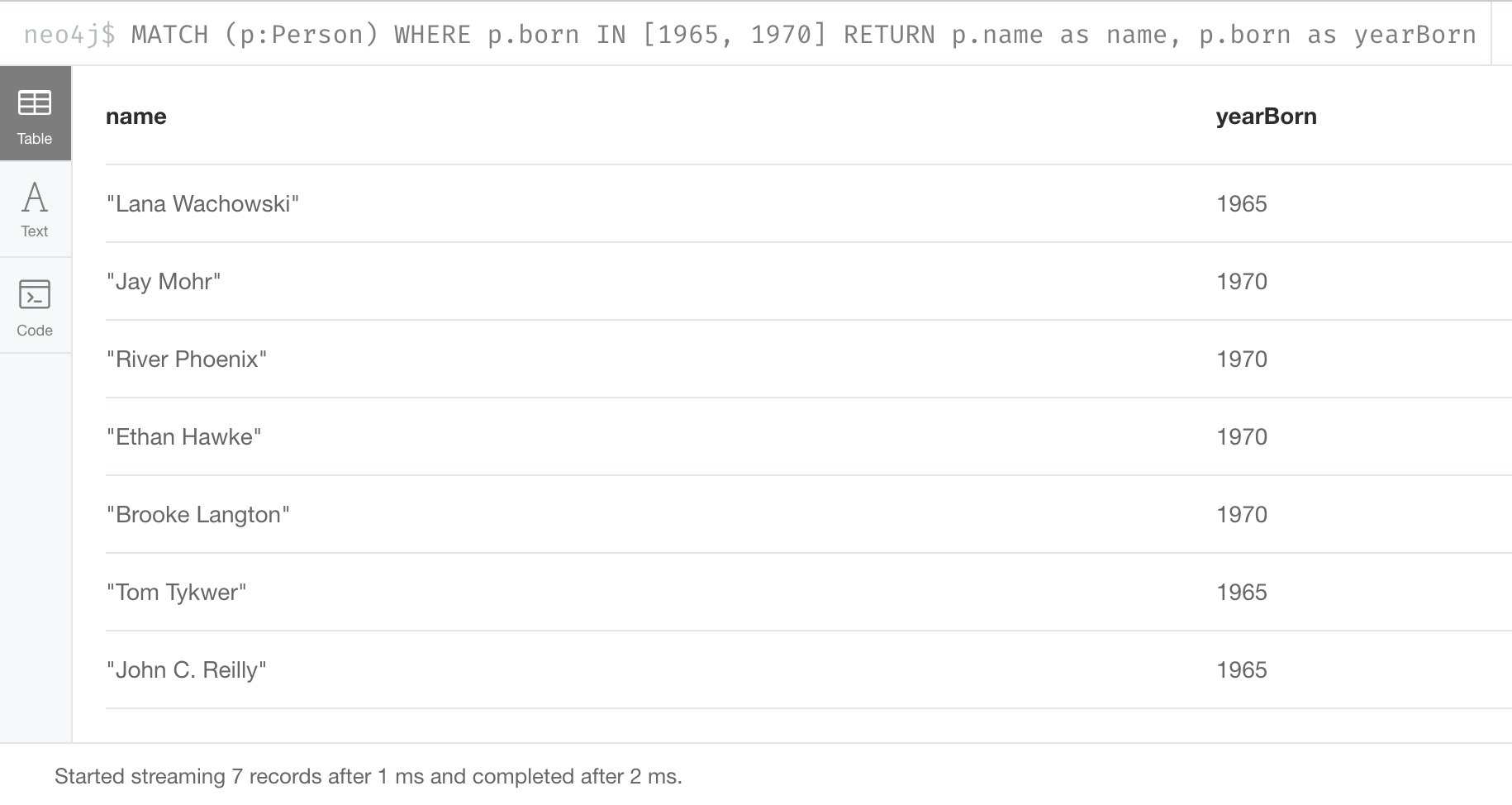 You can also compare a value to an existing list in the graph.

We know that the :ACTED_IN relationship has a property, roles that contains the list of roles an actor had in a particular movie they acted in. Here is the query we write to return the name of the actor who played Neo in the movie The Matrix:

Later in this course, you will learn how to create lists from your queries by aggregating data in the graph.

Suppose you want to add a WHERE clause at the end of this statement to filter the results retrieved.

What variables, can you test in the WHERE clause?

Suppose you want to retrieve all movies that have a released property value that is 2000, 2002, 2004, 2006, or 2008. Here is an incomplete Cypher example to return the title property values of all movies released in these years. What keyword do you specify for XX?

We want a query that returns the names of any people who both acted in and wrote the same movie. What query will retrieve this data?

You should now be able to write Cypher WHERE clauses to test:

Check Answers Continue to Working with Patterns in Queries