Introduction to Graph Algorithms with Neo4j 4.0

How do graph algorithms work? 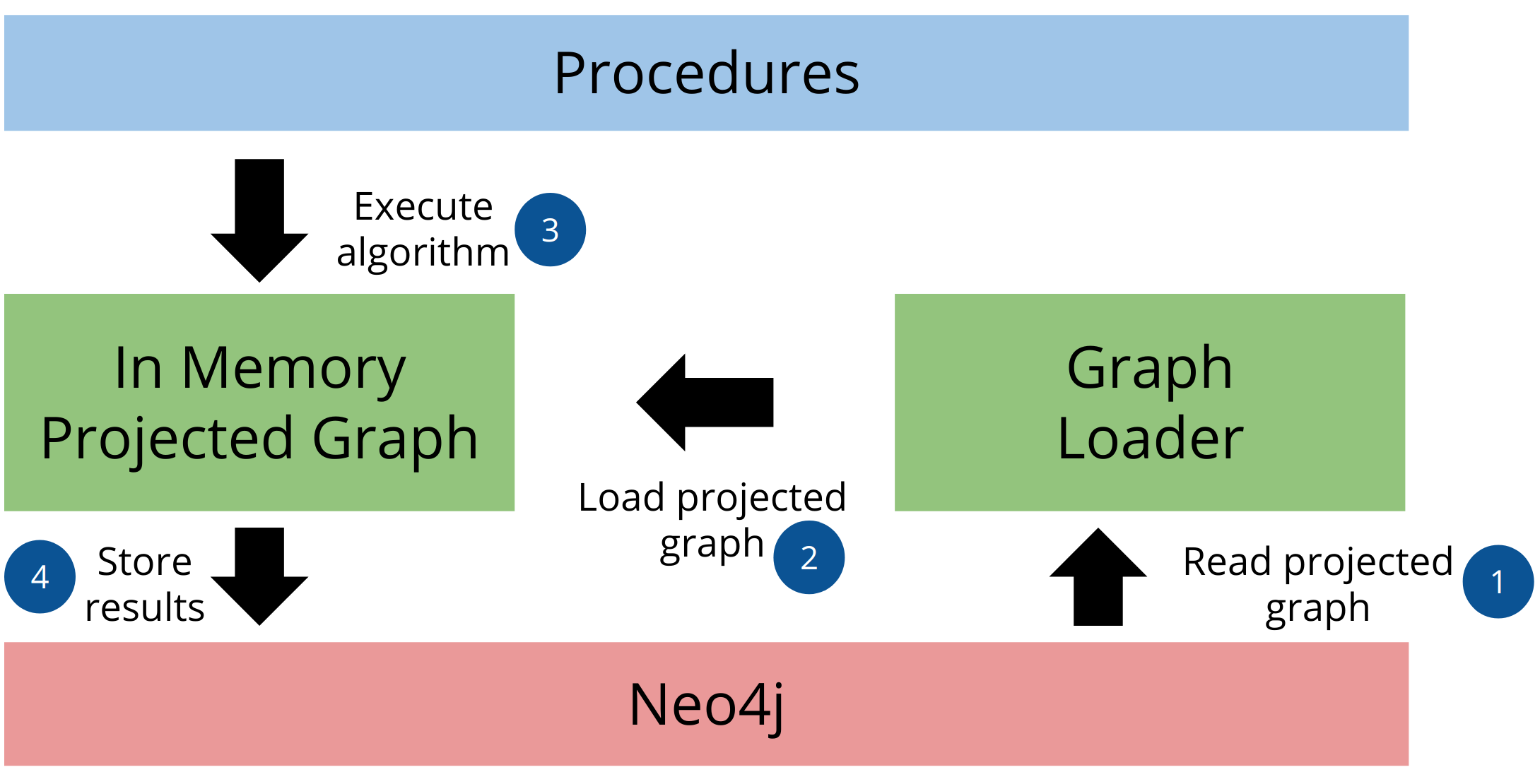 In this lesson, you will learn the various methods to load an in-memory projected graph which include: 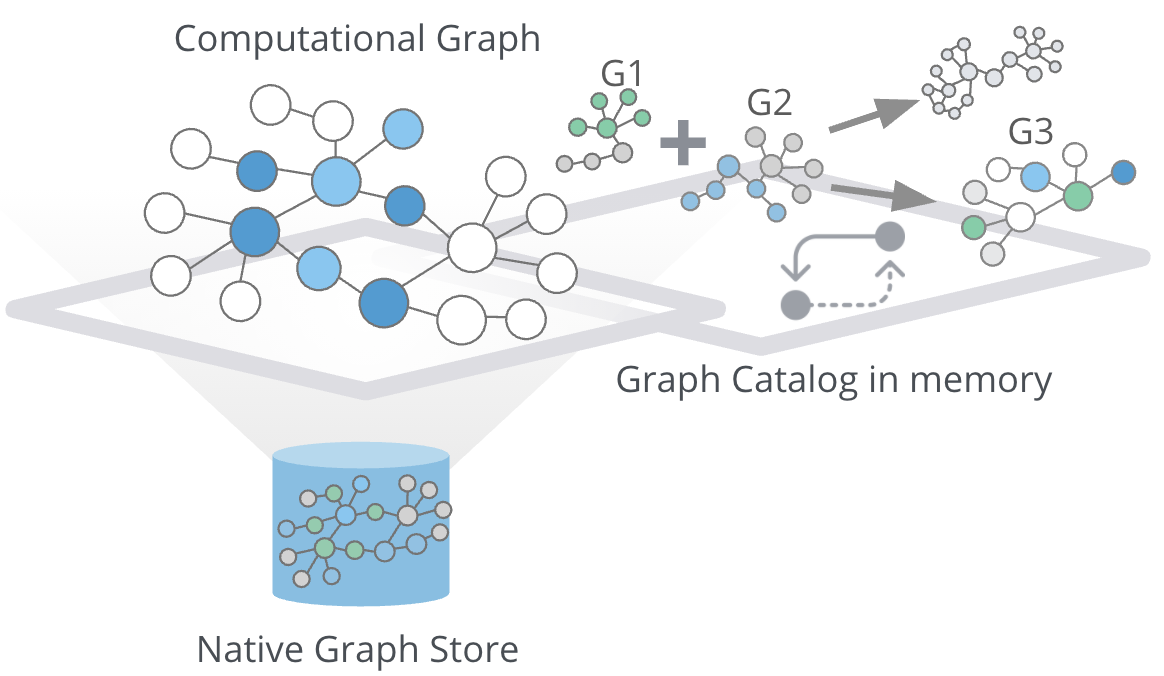 The graph catalog is a concept within the GDS library that allows managing multiple graph projections by name. We call a graph stored in the graph catalog a named graph because you can retrieve it using its name when executing graph algorithms. The advantage of using named graphs is that they can be used many times in the analytical workflow. This way, you do not have to load the projected graph for each algorithm separately, saving time. You can also use the results of one graph algorithm as an input to another graph algorithm. Named graphs can be created using either Native projections or Cypher projections. After usage, named graphs can be removed from the catalog to free up the main memory.

A native projection allows you to project a graph from Neo4j into an in-memory graph. The projected graph can be specified in terms of node labels, relationship types, and properties. The main benefit of native projections is their performance. The general syntax for using native projection to load a named graph is:

With the graph name parameter, you specify the name of the projected graph. The node projection parameter is used to define the nodes you want to project.

There are three supported options for the node projection parameter.

You will very rarely need to use the Map option for the Node projection parameter. If you need to project many labels and their properties, you can use the array input for Node projection combined with the nodeProperties parameter.

The aggregation parameter can be used to reduce a multigraph to a single graph.

Read more about it in the documentation.

Here is a simple example of using Native projection to project a named graph:

Here we project a graph consisting of nodes labeled Person and their seed property. In relationship projection, we define a single relationship type HELPS with its weight and cost properties.

Here is a more complex example:

We project a graph that contains nodes labels Person and Organization. For the relationship projection, we use the Map option, where we project the LIKES relationship type with an UNDIRECTED orientation. We did not mention before, but when you load many node labels or relationship types, you can filter them at algorithm execution time. This way, you can, for example, load more relationship types between a single node label and observe how the community structure and node ranking differ between the two networks using a single named graph.

The general syntax for using Cypher projection to load a named graph is:

As before, with the graph name parameter, you specify the name of the projected graph. The node query parameter is used to describe the nodes you want to project. The input is a single Cypher query that must return an id of the node. For the id, the Neo4j internal node id is used. Another reserved column is the labels column, which can be used to describe the node’s label. Using the labels column in return allows you to filter node labels at algorithm execution time like with the Native projection.

Example: Preparing for a Relationship projection

Here is an example node query describing all Person and Organization nodes, and returning the internal node id, its label, and the seed property:

Because we use the count() aggregation in the relationship query, we effectively reduce a multigraph to a single graph.

Example: Using the Relationship projections to create the named graph

Putting all this information together, we would use the following syntax to project the undirected coauthorship network:

Another example of projecting inferred relationships with Cypher projections is from the Russian Twitter troll analysis.

If in your analysis you have created named graphs, you can view existing named graphs with the following procedure:

After you have finished your graph analysis, you can release the named graph from the main memory.

The syntax to release the named graph from the Graph Catalog is:

When using the GDSL, the typical workflow is to create a graph and store it in the Graph Catalog. However, if you want to run a single algorithm quickly, it may be convenient to use an anonymous projection. The syntax for describing node labels and relationship types is similar to the ordinary syntax for named graphs. You can use both the Native projection or Cypher projection for describing anonymous graphs.

Instead of separately projecting the in-memory graph, and then later executing a graph algorithm, you describe the Node projection and Relationship projection directly as configuration parameters of an algorithm.

Here is an example of executing the PageRank graph algorithm using the anonymous graph with Native projection:

Similarly to using Native projection on an anonymous graph, you can describe the Node query and Relationship query directly as configuration parameters of an algorithm:

Here is an example of executing the PageRank graph algorithm using the anonymous graph with Cypher projection:

How to use graph algorithms

The stream mode will return the results of the algorithm computation as Cypher result rows. This is similar to how standard Cypher queries operate.

If the graph is very large, the result of a stream mode computation will also be very large. Using the ORDER BY and LIMIT clauses in the Cypher query could be useful to support ‘top N’-style use-cases.

The general syntax to use the stream mode is:

The stats mode returns statistical results for the algorithm computation like counts or percentile distributions. A statistical summary of the computation is returned as a single Cypher result row.

The direct results of the algorithm are not available when using the stats mode. This mode forms the basis of the mutate and write execution modes, but does not attempt to make any modifications or updates anywhere.

The general syntax to use the stats mode is:

The write mode will write the results of the algorithm computation back to the Neo4j database. This is similar to how standard Cypher writing queries operate.

A statistical summary of the computation is returned, similar to the stats mode. This is the only execution mode that will attempt to make modifications to the Neo4j database.

The written data can be node properties (such as Page Rank scores), new relationships (such as Node Similarity similarities), or relationship properties. The write mode can be very useful for use-cases where the algorithm results would be inspected multiple times by separate queries since the computational results are handled entirely by the library.

For the results from a write mode computation to be used by another algorithm, a new graph must be created from the Neo4j database with the updated graph.

The general syntax to use the write mode is:

The mutate mode will write the results of the algorithm computation back to the in-memory graph.

Note that the specified mutateProperty value must not exist in the in-memory graph beforehand. This enables running multiple algorithms on the same in-memory graph without writing results to Neo4j in-between algorithm executions.

This execution mode is especially useful in three scenarios:

A statistical summary of the computation is returned similar to the stats mode. Mutated data can be node properties (such as Page Rank scores), new relationships (such as Node Similarity similarities), or relationship properties.

The general syntax to use the mutate mode is:

Guided Exercise: Getting started with the graph algorithms workflow

Follow along with this video to become familiar with the GDSL Graph Management in Neo4j NEuler.

What are the supported modes for executing graph algorithms?

What are the benefits of using named graphs?

Which algorithm execution modes perform no write back operations to either projected or stored graph?

In this lesson, you learned some best practices for working with graph algorithms as part of your analytics workflow.