You have learned how to query nodes and relationships in a graph using simple patterns and also how to use the WHERE clause for filtering queries.

At the end of this module, you should be able to write Cypher statements to:

Traversal in a MATCH clause

Suppose we want to find all of the followers of people who reviewed the movie, The Replacements.

Here is the query to do this: 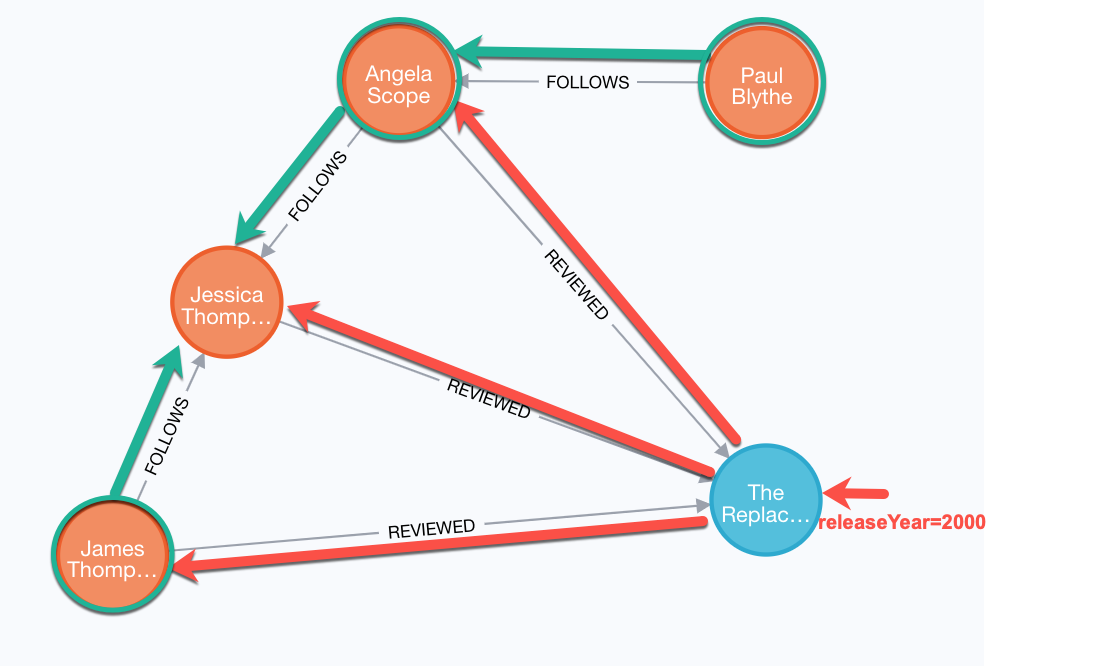 Specifying multiple patterns in a MATCH

Up until now, you have specified a single MATCH pattern in a query with filtering in a WHERE clause. You can specify multiple patterns in a MATCH clause.

Suppose we want to write queries that focus on movies released in the year 2000. Here are the nodes and relationships for these movies:

This MATCH clause includes a pattern specified by two paths separated by a comma:

It returns a Person nodes for people who acted in these three movies and using that same movie node,m it retrieves the Person node who is the director for that movie, m.

Here is the result of executing this query: 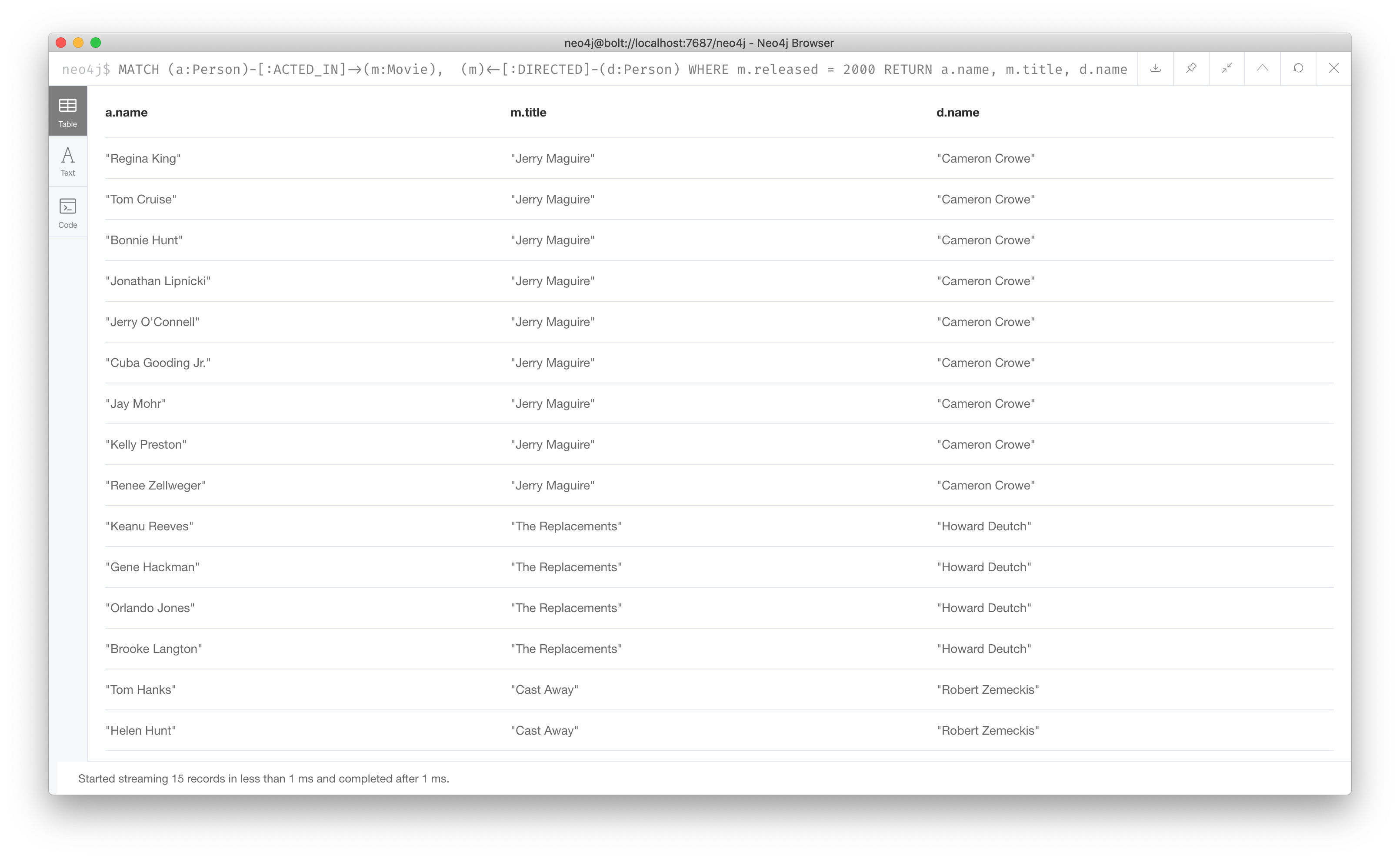 It returns 15 rows, one for each actor with the associated movie title and name of the director for that particular movie. When multiple patterns are specified in a MATCH clause, no relationship is traversed more than one time.

However, a better way to write this same query would be:

There are, however, some queries where you will need to specify two or more patterns. Multiple patterns are used when a query is complex and cannot be satisfied with a single pattern. This is useful when you are looking for a specific node in the graph and want to connect it to a different node. You will learn about creating nodes and relationships later in this training.

Here are some examples of specifying two paths in a MATCH clause.

When you perform this type of query, you may see a warning in the query edit pane stating that the pattern represents a cartesian product and may require a lot of resources to perform the query. You should only perform these types of queries if you know the data well and the implications of doing the query.

If you click the warning symbol in the top left corner, it produces an explanation result pane. 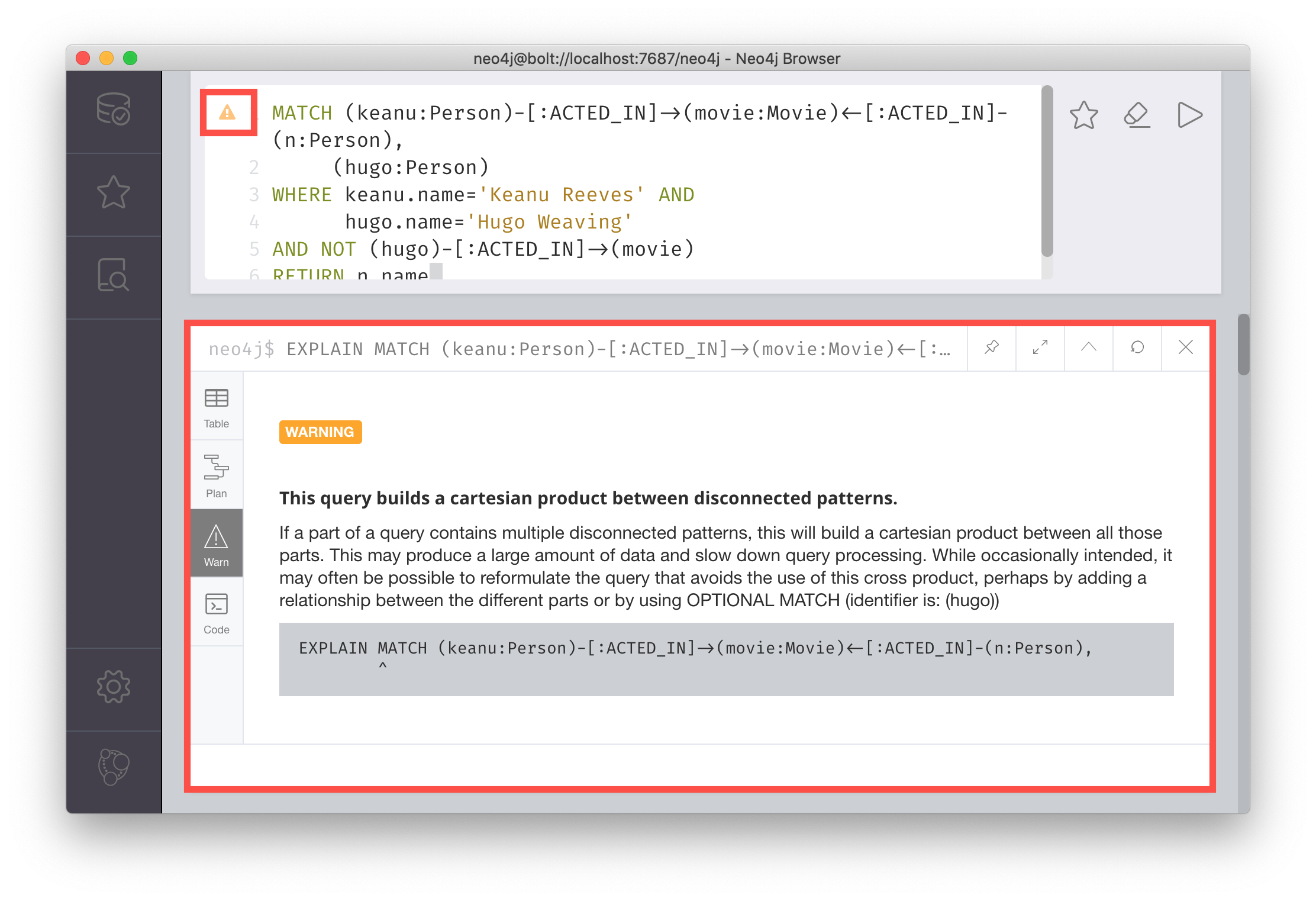 Here is the result of executing this query: 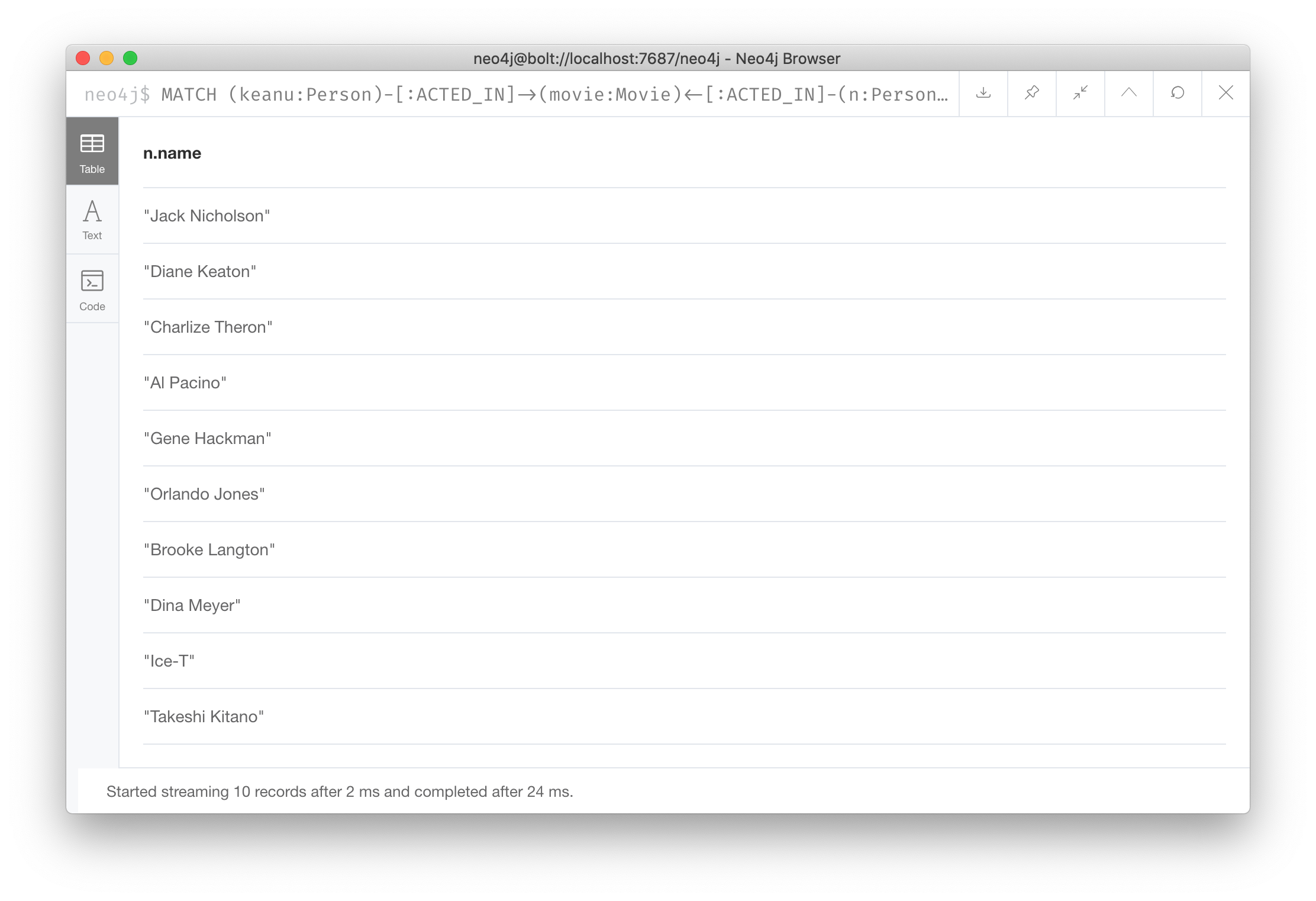 Here is another example where two patterns are necessary.

Suppose we want to retrieve the movies that Meg Ryan acted in and their respective directors, as well as the other actors that acted in these movies. Here is the query to do this: 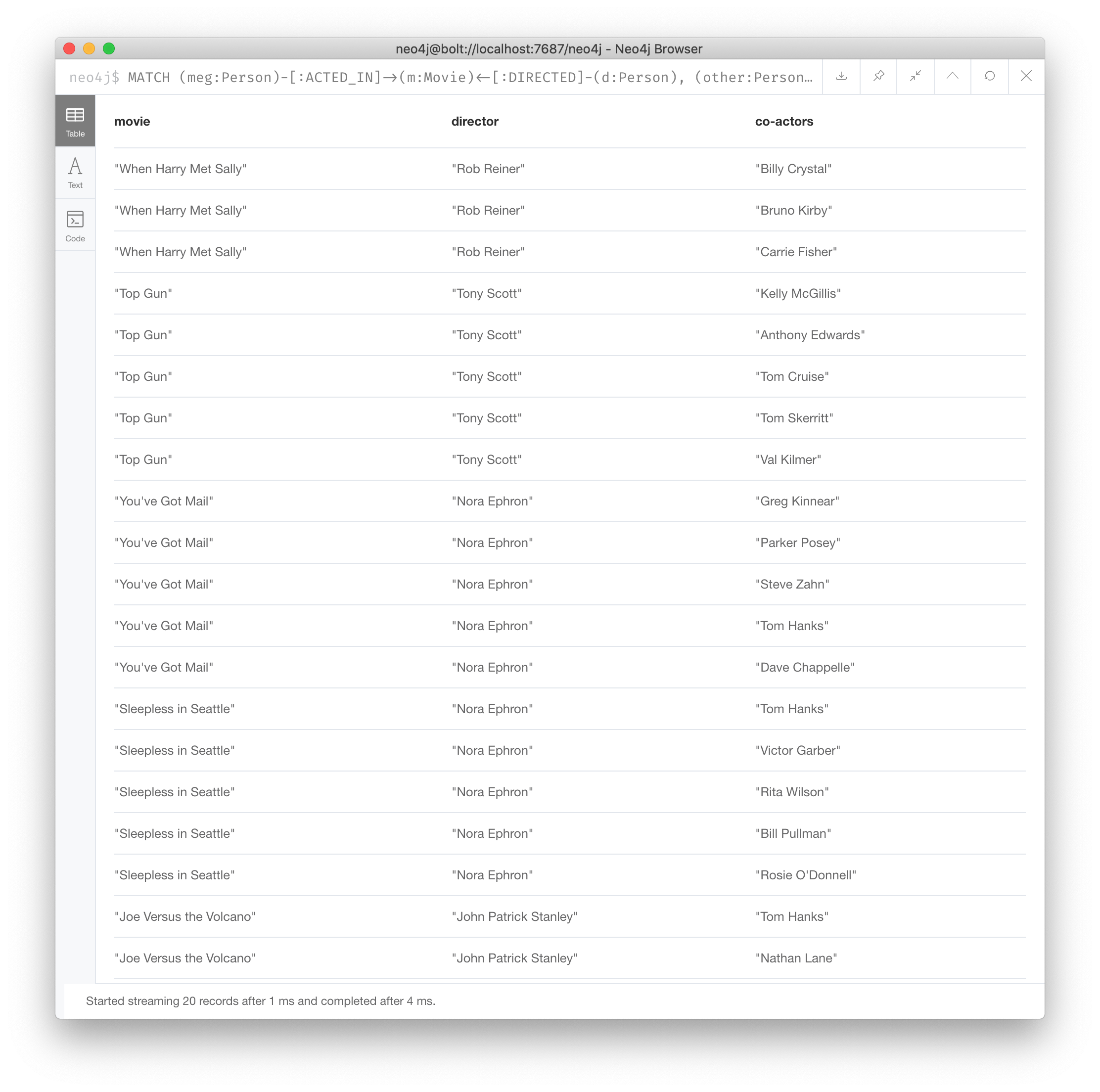 During a query, you want to minimize the number of paths traversed. In some cases, however, you can only retrieve the nodes, relationships, or paths of interest using multiple patterns or even multiple MATCH clauses.

Here is an example query where multiple MATCH clauses are used:

When the query engine traverses the graph for these MATCH clauses, we see that the ACTED_IN relationship is traversed twice. 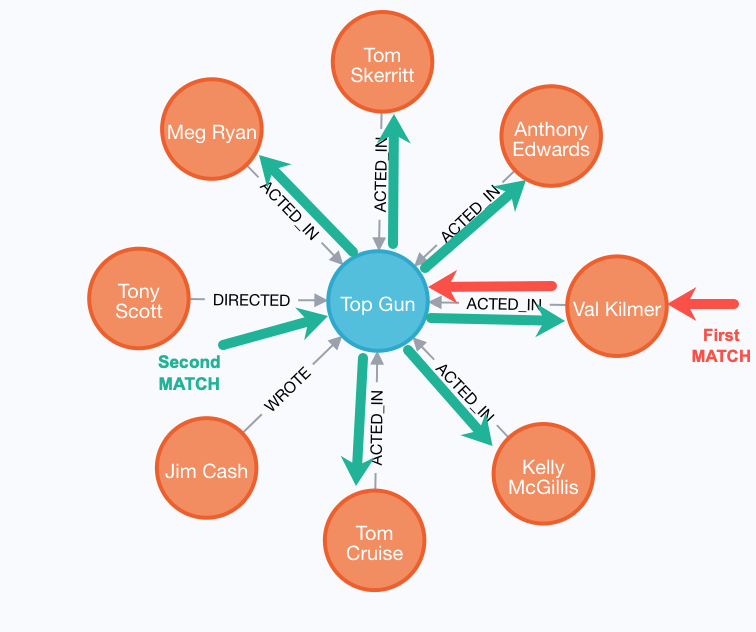 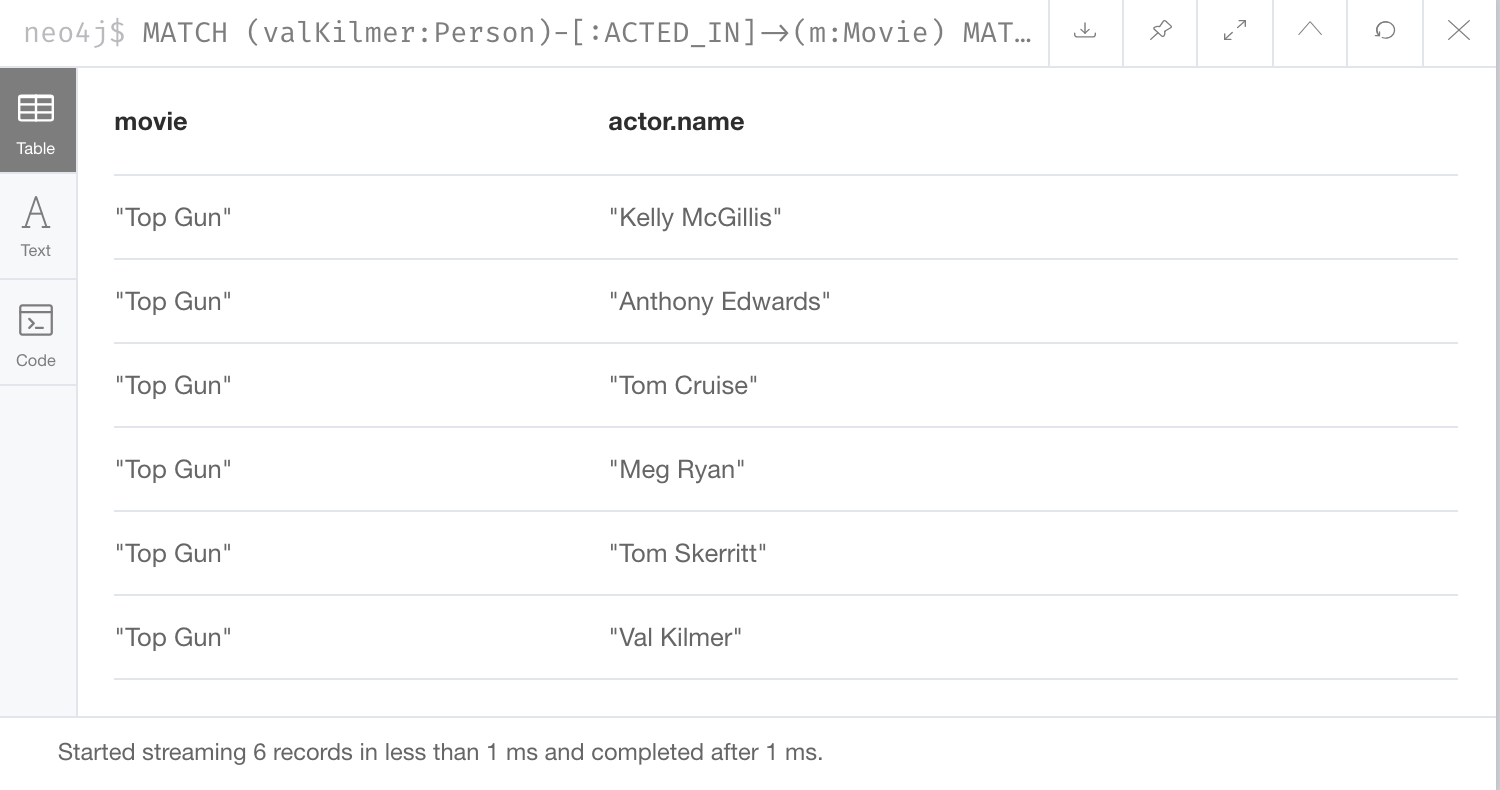 Here is the same example where multiple patterns are specified in a single MATCH clause: 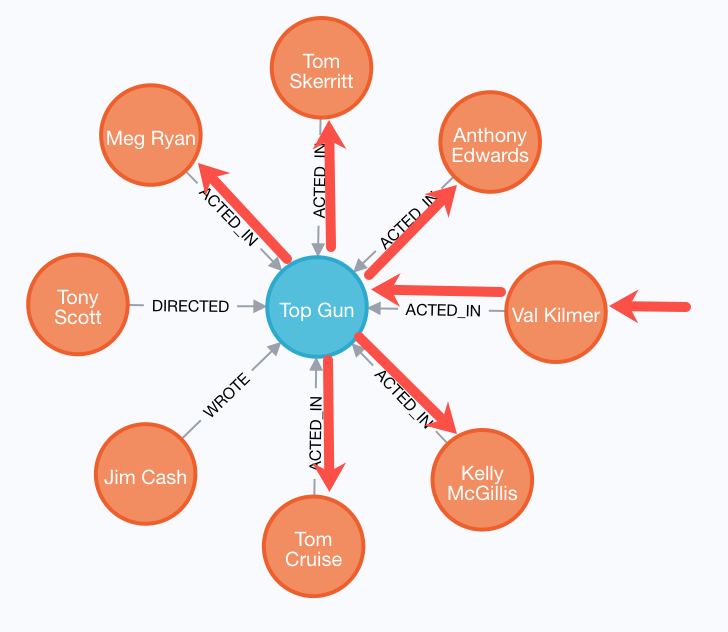 The result returned is smaller because it does not include the Val Kilmer node.

A best practice is to traverse as few nodes as possible so in this example, using multiple MATCH patterns is best.

Any graph that represents social networking, trees, or hierarchies will most likely have multiple paths of varying lengths. Think of the connected relationship in LinkedIn and how connections are made by people connected to more people. The Movie database for this training does not have much depth of relationships, but it does have the :FOLLOWS relationship that you learned about earlier: 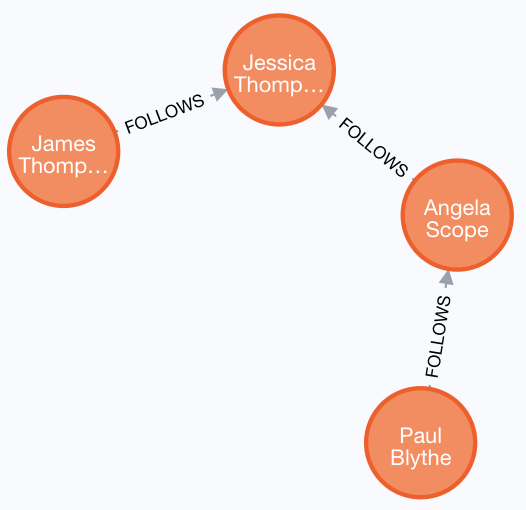 You write a MATCH clause where you want to find all of the followers of the followers of a Person by specifying a numeric value for the number of hops in the path. Here is an example where we want to retrieve all Person nodes that are exactly two hops away:

If we had specified [:FOLLOWS*] rather than [:FOLLOWS*2], the query would return all Person nodes that are in the :FOLLOWS path from Paul Blythe.

Here are simplified syntax examples for how varying length patterns are specified in Cypher:

Retrieve all paths of any length with the relationship, :RELTYPE from nodeA to nodeB and beyond:

Retrieve all paths of any length with the relationship, :RELTYPE from nodeA to nodeB or from nodeB to nodeA and beyond. This is usually a very expensive query so you should place limits on how many nodes are retrieved:

Retrieve the paths of length 3 with the relationship, :RELTYPE from nodeA to nodeB:

Retrieve the paths of lengths 1, 2, or 3 with the relationship, :RELTYPE from nodeA to nodeB, nodeB to nodeC, as well as, nodeC to _nodeD) (up to three hops):

A built-in function that you may find useful in a graph that has many ways of traversing the graph to get to the same node is the shortestPath() function. Using the shortest path between two nodes improves the performance of the query.

In this example, we want to discover a shortest path between the movies The Matrix and A Few Good Men. In our MATCH clause, we set the variable p to the result of calling shortestPath(), and then return p. In the call to shortestPath(), notice that we specify * for the relationship. This means any relationship; for the traversal.

When you specify this MATCH clause to use the shortestPath() function as shown here with an unbounded varying length, you will see this warning:

You should heed the warning, especially for large graphs. You can also read the Graph Data Science documentation about the shortest path algorithm, which performs even better than the one that is build into Cypher.

Notice that the graph engine has traversed many types of relationships to get to the end node.

When you use ShortestPath(), you can specify a upper limits for the shortest path. In addition, you should aim to provide the patterns for the from an to nodes that execute efficiently. For example, use labels and indexes.

In using shortestPath(), the return type is a path. A subgraph is essentially as set of paths derived from your MATCH clause.

For example, here is an example where we want a subgraph of all nodes connected to the movie, The Replacements:

If in Neo4j Browser where have unset Connect result nodes, the result is visualized as a graph because the query has returned a set of paths which are a subgraph.

Here is the result of this query: 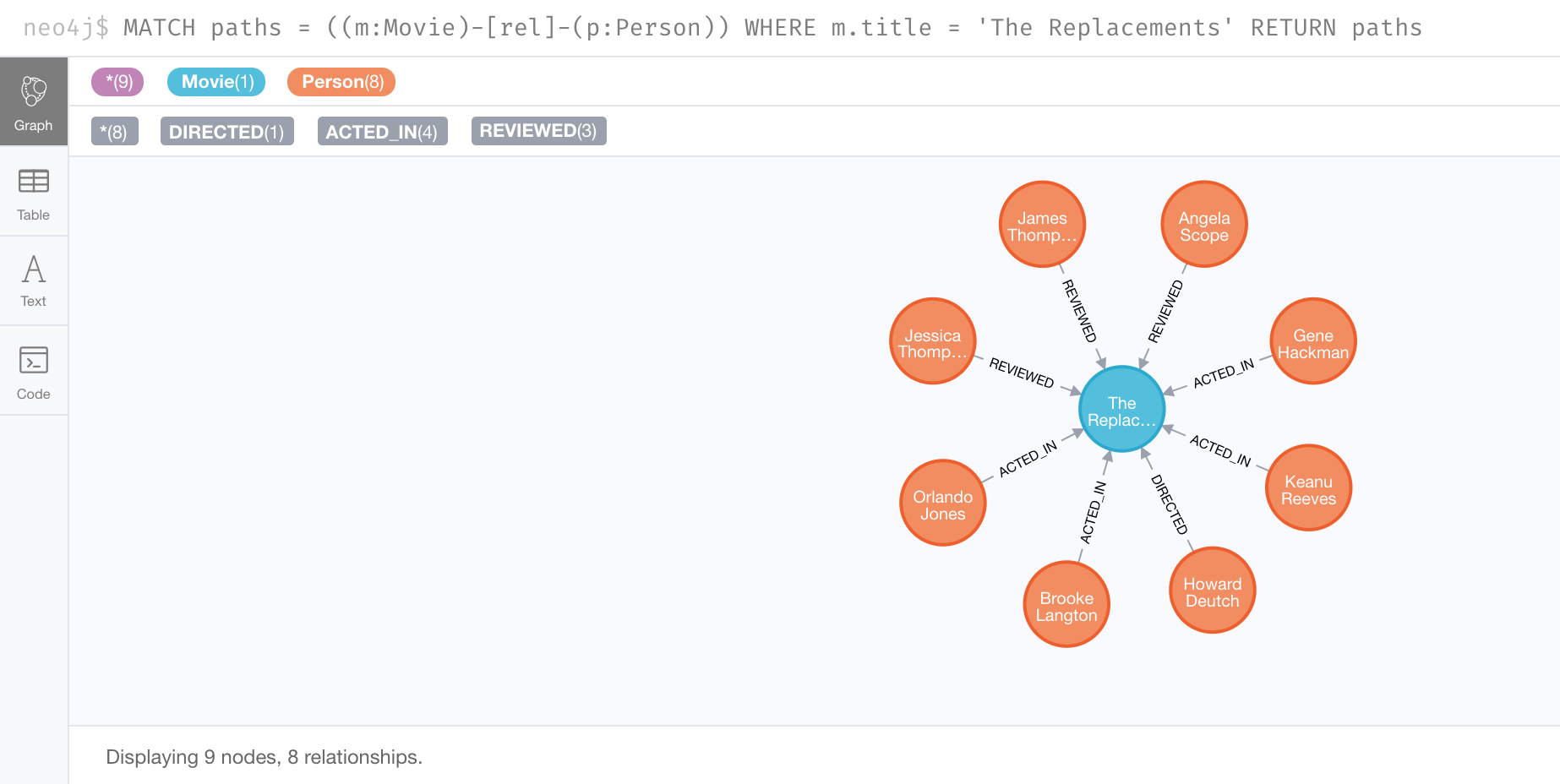 If you view the result as text, you will see that it is simply a set of rows where a movie is connected to a person:

The APOC library is very useful if you want to query the graph to obtain subgraphs.

OPTIONAL MATCH matches patterns with your graph, just like MATCH does. The difference is that if no matches are found, OPTIONAL MATCH will use nulls for missing parts of the pattern. OPTIONAL MATCH could be considered the Cypher equivalent of the outer join in SQL.

Here is a subgraph of our movies graph with all people named James and their relationships:

Here is an example where we query the graph for all people whose name starts with James. The OPTIONAL MATCH is specified to include people who have reviewed movies:

Notice that for all rows that do not have the :REVIEWED relationship, a null value is returned for the movie part of the query, as well as the relationship.

Exercise 5: Working with patterns in queries

Given this Cypher query:

What is the first node that is retrieved by the query engine?

We want a query that returns a list of people who acted in movies released later than 2005 and for those movies, also return title and released year of the movie, as well as the name of the writer. How can you correct this query?

Suppose you have a graph of Person nodes representing a social network graph. A Person node can have a IS_FRIENDS_WITH relationship with any other Person node. Like in Facebook, there can be a long path of connections between people. What Cypher MATCH clause would you use to find all people in this graph that are two to four hops away from each other?

You should now be able to write Cypher statements to: