At the end of this module, you should be able to write Cypher statements to:

Creating data in the graph

For example, how the graph engine behaves when a duplicate element is created depends on the type of element. You have not yet learned about defining constraints in the graph. Constraints can be used to eliminate duplication of nodes and you will learn about them later in this course.

Here are some facts about creating nodes and relationships in the graph when no constraints have been defined.

The MERGE clause is used to find nodes or patterns in the graph. If the node or pattern is not found, by default, it is created.

You use the simple MERGE clause to:

Here is the simplified syntax for the MERGE clause for creating a node:

Here is what we currently have in the graph for the Person, Michael Caine. This node has values for name and born. Notice also that the label for the node is Person.

In this example, we use MERGE to find a node with the Actor label with the key property name of Michael Caine, and we set the born property to 1933. Our data model has never used the label, Actor so this is a new entity type in our graph.

Here is the result of running this Cypher example. We do not find a node with the label Actor so the graph engine creates one.

If we were to repeat this MERGE clause, no additional Actor nodes would be created in the graph.

At this point, however, we have two Michael Caine nodes in the graph, one of type Person, and one of type Actor: 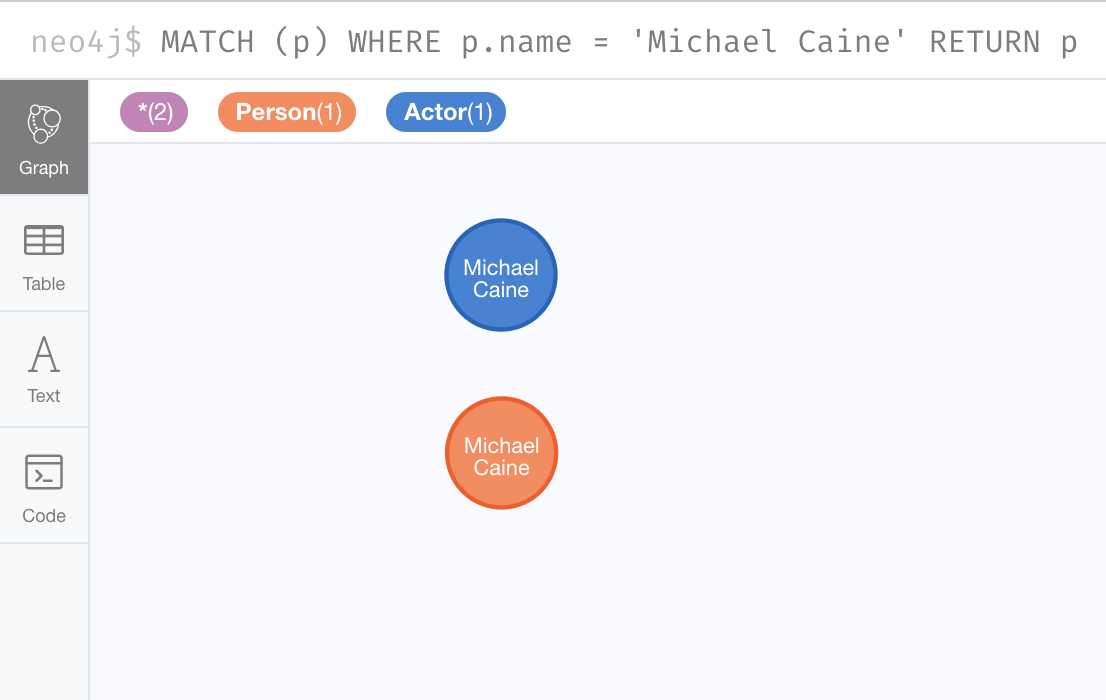 Be mindful that node labels and the properties for a node are significant when merging nodes.

If we were to run MERGE code again:

We would find that the Michael Caine node with the label Actor is not created. The MERGE found this node in the graph and did not create a new one.

Here is the syntax for the MERGE clause for creating relationships:

Here is an example. We currently have the Person node with the :ACTED_IN relationship, but we do not have this relationship with the Actor node. 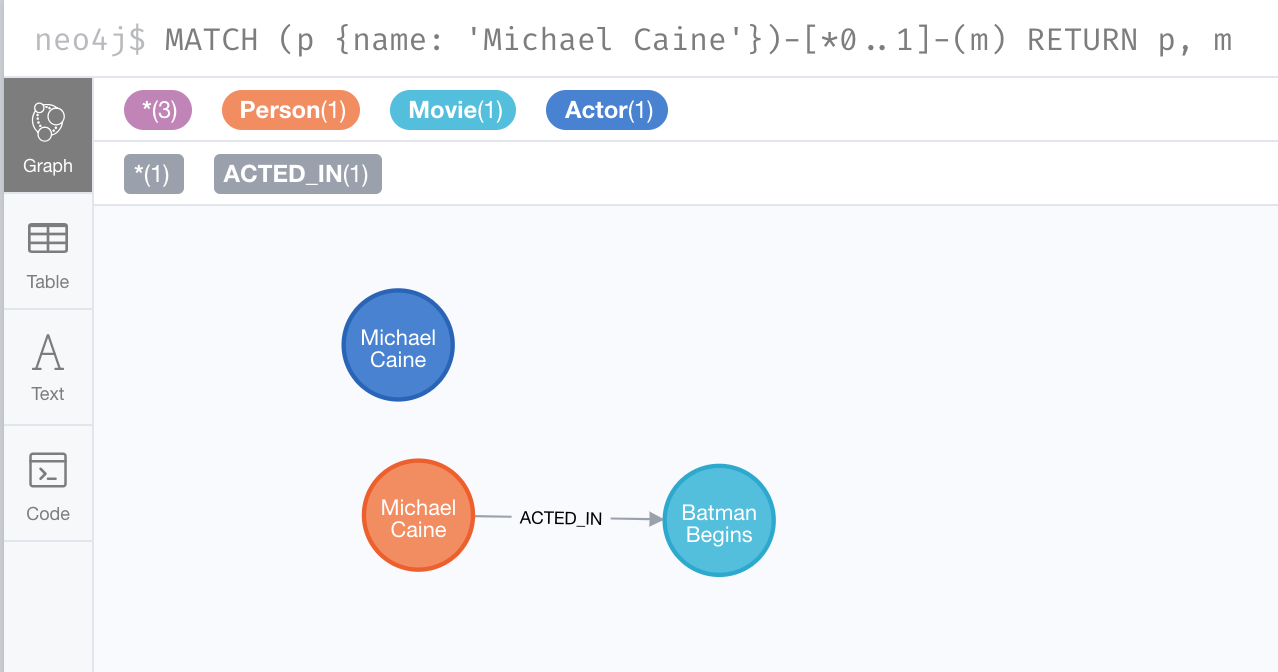 Here is code where we want to create the :ACTED_IN relationship between Michael Caine and the movie Batman Begins.

Here is the result of running this code:

You can use the MERGE clause, along with ON CREATE to assign specific values to a node being created as a result of an attempt to merge.

Here is an example where create a new node, specifying property values for the new node:

We know that there are no existing Sir Michael Caine Person nodes. When the MERGE executes, it will not find any matching nodes so it will create one and will execute the ON CREATE clause where we set the birthplace and born property values.

Here is the result of executing this code:

Here is the code to display the nodes that have anything to do with Michael Caine.

The most recently created node has the name value of Sir Michael Caine.

You can also specify an ON MATCH clause during merge processing. If the exact node is found, you can update its properties or labels. Here is an example: 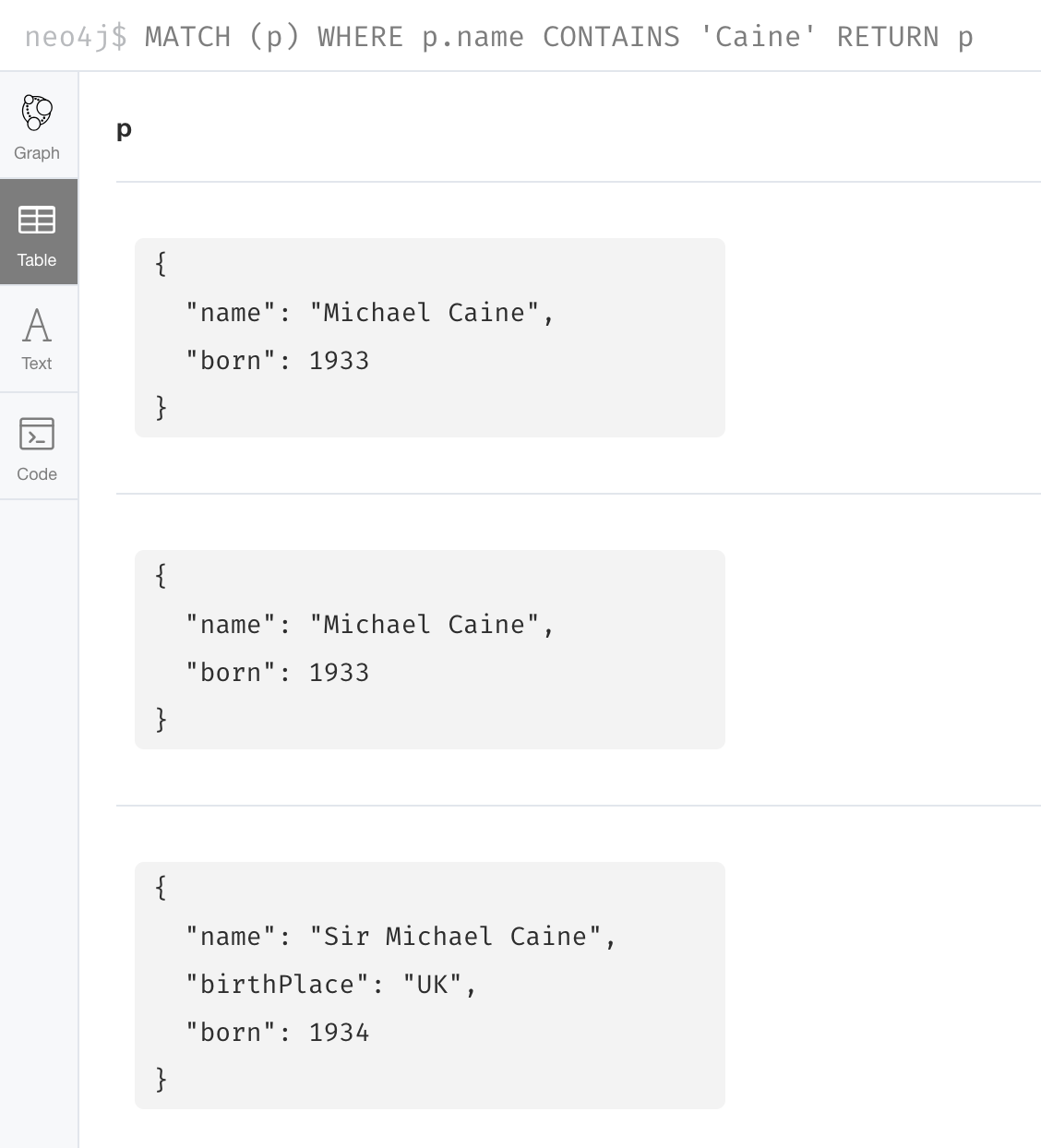 Using MERGE to create relationships is expensive and you should only do it when you need to ensure that a relationship is unique and you are not sure if it already exists.

In this example, we use the MATCH clause to find all Person nodes that represent Michael Caine and we find the movie, Batman Begins that we want to connect to all of these nodes. We already have a connection between one of the Person nodes and the Movie node. We do not want this relationship to be duplicated. This is where we can use MERGE as follows:

You must be aware of the behavior of the MERGE clause and how it will automatically create nodes and relationships. MERGE tries to find a full pattern and if it doesn’t find it, it creates that full pattern. That’s why in most cases you should first MERGE your nodes and then your relationship afterwards.

Only if you intentionally want to create a node within the context of another (like a month within a year) then a MERGE clause with one bound and one unbound node makes sense.

Exercise 12: Merging data in the graph

Given this MERGE clause, what is the most important thing you should make sure of?

Given this MERGE clause. Suppose that the p and m nodes exist in the graph. What does this code do?

You should now be able to write Cypher statements to:

Check Answers Continue to Defining Constraints for your Data