Google Kubernetes Engine and Neo4j: Power Your Apps with Graphs

Google Kubernetes Engine (GKE) is a hosted, managed version of Kubernetes. As such, it is a great environment for developers to start experimenting with the many use cases for Neo4j. Neo4j is available through the Google Cloud Platform Marketplace, so developers familiar with Kubernetes can have Neo4j running in minutes.

In this series, we will explore the power of containers and Kubernetes in combination with Neo4j. This week we’ll provide some background about Kubernetes and Neoj. 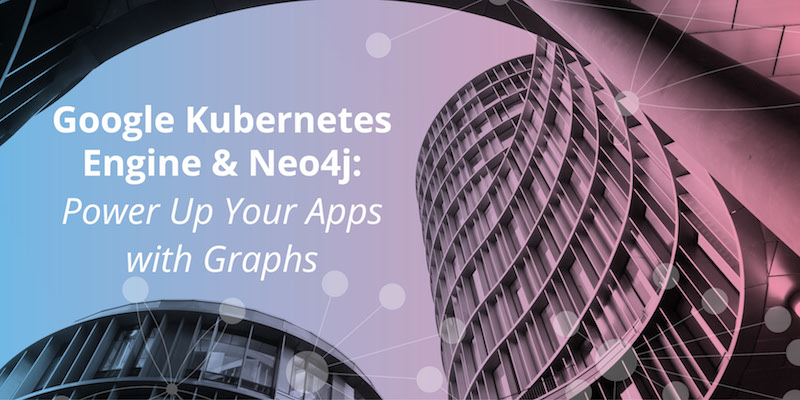 You probably already know the value of containers – and using Kubernetes to manage those containers – but here’s a brief recap.

Containers enable you to package an application and all of its dependencies, making the workload portable and eliminating the need to install or configure software. Instead of installing software on servers, users simply drop a container in place and tell the server to execute that software.

Once users see the value of containers, they tend to deploy them more widely. Users develop complex workloads that involve multiple containers talking to one other. They build larger architectures that involve a number of different applications in containers, which increases the management challenges they face. All of those containers must work together (that is, they must be orchestrated). That’s where Kubernetes comes in.

The operational overhead of setting up, configuring and managing Kubernetes is challenging.

Enter Google Kubernetes Engine (GKE). GKE is Kubernetes hosted and managed for you – better, easier and more affordably than you can manage yourself – and with the added powerful benefits of scalability and uptime guarantees.

With GKE, you easily run flexible business workloads and connect those workloads. GKE enables you to run a wide variety of applications and services, including persistent storage and databases. With GKE, your container architecture operates seamlessly with high availability. Google Site Reliability Engineers (SREs) constantly monitor your cluster and its compute, networking and storage resources so you don’t have to – giving you back time to focus on your applications.

GKE is Kubernetes, expertly managed and simplified for you. All you need now is an app store. The GCP Marketplace features numerous applications and components for you to easily deploy. You may have heard of graph database like Neo4j or have even thought of experimenting with them but don’t know where to start. The GCP Marketplace removes the friction of deployment and orchestration. That way you’re up and running within minutes on GKE when you utilize applications like Neo4j Enterprise Edition or its Causal Clustering features.

The Power of a Graph Database Platform

Despite what’s implied in the name, relational databases (RDBMS) don’t excel at identifying relationships among data.

While relational databases manage volumes of information, they lack the ability to generate insight from that data. The value of data increases exponentially when it’s connected and its relationships are revealed – which is where a graph database comes into play.

A graph database enables you to query your data and discover connections and relationships among data much faster than JOINing tables within a traditional relational database or even using another NoSQL database such as MongoDB or Elasticsearch.

Neo4j helps you solve connected data problems with high performance and flexibility. GKE manages all of your infrastructure and gives you best-in-class cloud capabilities.

Next week, we’ll dive deeper into the specific benefits of deploying Neo4j on GKE and how Google Cloud Platform Marketplace brings the two together to help you get started in minutes.

Get started with Google Kubernetes Engine and Neo4j
See how developers are adding graph superpowers to their applications in this white paper, How GKE and Neo4j Power Your Apps with Graphs. Click below to get your free copy.