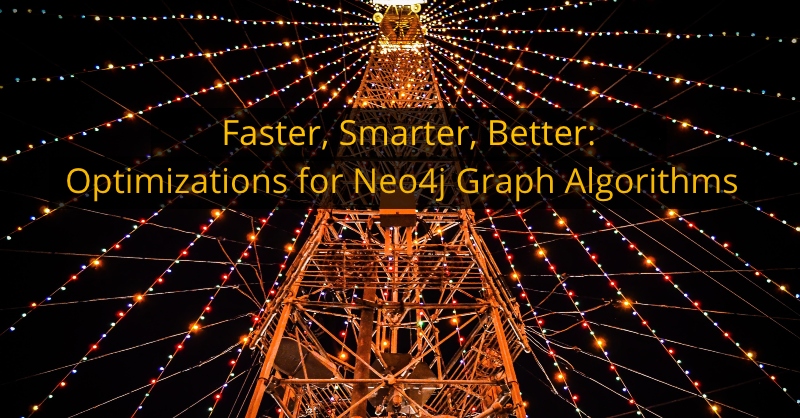 We’re happy to share recent improvements to the Neo4j Graph Algorithms library. These updates include optimizations at several layers, improved configuration and usability, as well as specific feature requests.

A big “thank you” to those who provided suggestions on how to better serve data scientists in production environments, ranging from graph analytics to graph-enhanced machine learning!

In this post, we’ll summarize the operational improvements from 3.5.6.1 through 3.5.9.0. We’ll also dive into a bit more detail on specific algorithm enhancements.

You can install the latest algorithms library directly from the Neo4j Desktop in the ‘Plugins’ section of your project or on the Neo4j Download Center.

The infrastructure improvements involved a few visible changes, such as helping users plan for resource requirements and providing more baseline graph information, as well as changes “under the hood” to improve performance and stomp out a few bugs.

Compute Memory Requirements Ahead of Time

The most anticipated change in overall operations is the ability to compute memory requirements ahead of time. The algo.memrec procedure determines memory needs for loading a graph (or Cypher projection) into memory and for running specific algorithms: PageRank, Label Propagation, Connected Components (Union Find) and Louvain.

This feature is super handy for getting the memory configuration right. Because Neo4j graph algorithms run completely in heap memory, the need for running analytics workloads is likely different than your transaction workloads.

Memrec allows you to anticipate the memory that will be used to load your graph or run your algorithms, and should be used as a first step to make sure your configuration is appropriate. More detail on the memrec procedure is detailed in this post on Neo4j Graph Algorithms Release.

We’ve also split out the concurrency configuration for algorithms, allowing users to specify different concurrencies for reading data into memory and for writing results back to the graph after an algorithm completes. There’s more detail in the above mentioned blog post, but this enables users to more finely tune their environment for different uses and goals.

To increase overall performance, we’ve switched how we encode relationship weights in the in-memory graph; from using an array map to a parallel array. This change results in faster read/write speeds for weighted relationships and a lower memory footprint.

The default graph loader has been updated from heavy to huge graphs with optimizations and bug fixes that have drastically accelerated node loading. The huge graph loader also now supports relationship deduplication when duplicateRelationships is configured.

To simplify gathering basic information about our graphs, we added relationship counts and degree distribution statistics to the procedures for graph loading and graph info. We include the min/max and mean number of relationships well as the number of nodes in a range of degree percentiles.

Data scientists can use this type of data to understand relationship densities and distributions, which can impact algorithm choices and results. It’s also a quick way to check if the graph loaded as you expected and makes debugging simpler and more straightforward.

We have also added a new procedure, algo.graph.list(), that returns a list of the loaded graphs with their basic information. This is especially helpful when you’ve loaded many named graphs and can’t remember the names or even how many you have. (We’ve all been there!)

With the named graph list, house cleaning becomes much simpler because you can remove your extra graphs without having to restart the database.

Finally, there are also numerous other improvements from better error handling and bug fixes, to additional information that enhance usability. For example, algorithms will not execute when the provided node labels or relationship types don’t exist, and instead return an instructive error.

In regards to the algorithms themselves, we’ve made some general enhancements to accelerate results, as well as enterprise-grade optimizations for our product supported algorithms (PageRank, UnionFind /Connected Components, Louvain and Label Propagation). This aligns with our dual strategy to have many new algorithms created by our Labs team and a set of core algorithms with enterprise features supported and developed by our product engineering team.

As the product team implements new algorithms or variants of existing algorithms, we are giving users early access to these new features, via the added a beta namespace (algo.beta.