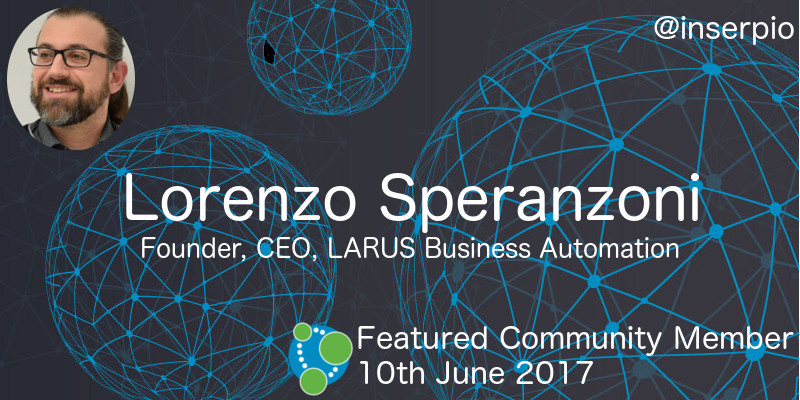 Lorenzo has been part of the Neo4j community since 2013. He started with mapping out Vincent van Gogh’s journey using Spring Data Neo4j and Neo4j-Spatial which led to the Neo4Art initiative. Lorenzo prefers graph databases over other NoSQL databases because of the flexible and expressive connected data model. To make it easier to integrate other databases with Neo4j he and his team worked on connectors for RDBMS, Couchbase, and MongoDB. They also developed and are maintaining Neo4j’s JDBC driver which allows you to use existing ETL and BI Tools with our graph database. In the recent months the Larus team has been supporting APOC development and improving the neo4j-etl-components.

Lorenzo’s spoken multiple times at GraphConnect conferences and he and his team at LARUS are very active members in the community.

My team finished up our engagement with @AgileLARUS today. I cannot say enough good things. If you want @neo4j guidance I highly recommend.

Thank you Lorenzo and team for all your work on behalf of the Neo4j community!

Christian Miles wrote an article showing how to combine Neo4j and Keylines to visualize crime patterns data as a graph.

In the post Christian imports data from the data.boston.gov initiative into Neo4j using APOC’s Load JSON procedure, before analysing it by district and crime category.

He goes on to add generated people, phone, and vehicle data to the graph to simulate the type of investigation a police officer might undertake.

This week from the Neo4j Knowledge Base we have a couple of workarounds for the lack of post UNION processing in Cypher.

openCypher: Transactions and Analytics with Neo4j and Cypher for Spark

We’re releasing roughly one video a day from GraphConnect Europe 2017, and this week saw the release of the openCypher talk given by Alastair Green, Stefan Plantikow, and Petra Selmer.

In the talk they cover using Cypher for OLTP workloads on Neo4j and OLAP workloads on Spark. They also propose a syntax for multi graph queries and the ability to return graphs from Cypher.

My favourite tweet this week was by the Sinar Project – an initiative using open source technology, development and ideas to make Malaysian government transparent and accountable.