Top 10 Use Cases: Bill of Materials

Graph technology is the future. Not only do graph databases effectively store relationships between data points, but they’re also flexible in adding new kinds of relationships or adapting a data model to new business requirements.

The previous blog in this series looked at using graph technology for identity and access management. This tenth and final blog takes on Bill of Materials (BOM), a particularly tricky set of data for manufacturing firms. Graph technology is a good fit for this use case to meet the data challenges of BOM and features a telling example of technology in action from the U.S. Army.

Use Case #10: Bill of Materials

The problem isn’t that the Bill of Materials (BOM) process is dead due to the era of digital transformation – it’s still the crux of manufacturing processes – but rather that new manufacturing data is everywhere and is poorly managed.

A lack of real-time collaboration with a distributed group of people (contractors, suppliers) – where products are multidisciplinary (mechanical, electro mechanical) and there’s new design-to-manufacturing workflows – spreadsheets and siloed data are barriers to success. 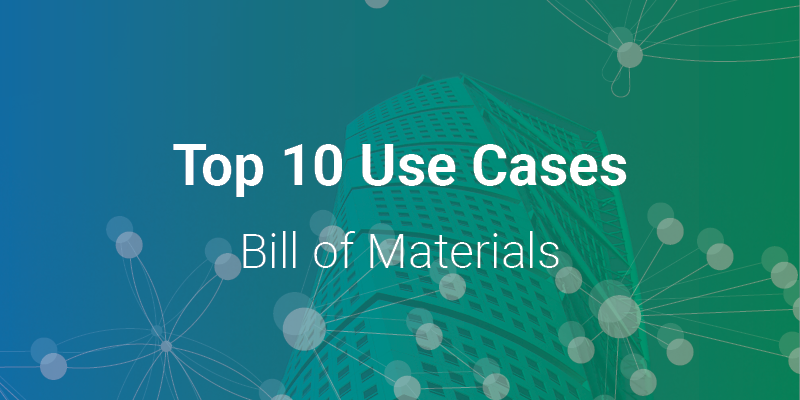 Why Use Graph Technology for Bill of Materials

Most enterprise manufacturers use vendor applications: CRM systems, work management systems, accounts payable, accounts receivable, point of sales systems, and so on. Due to this approach, you need to store and model data as a graph where a native graph stores interconnected master data that’s neither purely linear or hierarchical.

The challenge was to rapidly collect and combine a massive bill of materials (BoM) information – every component and its cost, what equipment it relates to, and its expected lifespan/ average time to failure.

With over 1 million active, guard and reserve soldiers and around 200,000 civilian staff, the Army also deploys a staggering amount of equipment – small arms, rifles and machine guns, tanks, trucks and armored vehicles, and thousands of ships, helicopters and aircraft.

Buying and managing this scale of equipment is a significant logistical challenge. It involves acquiring millions of parts for hundreds of thousands of weapons and vehicles every year, maintaining these components – sometimes in deadly, far-flung territories. It also involves the responsibility of knowing that doing the job properly saves not just costs, but lives.

This level of data management was becoming increasingly difficult, even impossible, on the Army’s aging mainframe-based system..

“Thanks to Neo4j’s graph database, the U.S. Army can now quickly store, explore and visualize their wealth of logistical data,” said Hendrickson. He noted that the contrast with their previous system was stark.

“Typically, it would take 60 person-hours to load data so the Army could understand ‘we’re going to need to replace X, Y, or Z parts’ or provide cost estimates and analyses,” said Hendrickson. “Now it’s down to seven to eight hours.”

Components are ordered sometimes millions at a time. With Neo4j, the Army anticipates the demand for spare parts and spread it across multiple time periods, instead of one quarter at a time. “The result is better ordering and budgeting,” Hendrickson said. “The Army gets a fuller total cost estimate, but it’s also a more predictable total cost of ownership (TCO) as well.”

“Neo4j enables analysts to save huge amounts of time,” Hendrickson continued. “Now everything is in the graph, we are able to see more detailed data that previously had been glossed over. We now have original data, and much better detail in analysis. Answers are immediate. As a result, the parts delivery is more accurate and order turnaround is much faster.”

With a 360-degree view of your BOM, you may leverage meaningful, contextual data connections. With a versatile graph model, it’s simple to evolve the system as data sources change over time. Performance and scalability enable real-time decision making – no matter how large the dataset.

These 10 use cases of graph databases are hardly a comprehensive list, but they do highlight impactful and profitable applications of graph technologies. Even so, there are plenty of other use cases for graph technologies, including the life sciences, social networking, gaming, government, sports and even non-profits.

Today’s CIOs and CTOs are under increasing pressure to provide actionable insights from their big data, even as datasets grow larger and more unwieldy. What they need is technology that determines the connections between data points and derives appropriate cogent conclusions.

Graph databases are that technology solution. They allow data professionals at every level to exploit the potential of their data relationships, rather than just individual data points. The only limit to how those relationships might be harnessed is up to the imagination of the database user.

In this way, graph databases are a rising tide – not merely a passing fad – in the world of big data insights.


Ready to learn more about Neo4j’s top 10 use cases? Click below to get your free copy of The Top 10 Use Cases of Graph Database Technology.