Like SQL, Cypher is a declarative query language that allows users to state what actions they want performed (such as match, insert, update or delete) upon their graph data without requiring them to describe (or program) exactly how to do it.

Two years ago, Neo4j, Inc. decided to open source the Cypher language and make the most popular graph query language available to any technology provider with the aim that Cypher become the "SQL for graphs." Thus, the openCypher project was born.

Since 2017, the openCypher Implementers Group (oCIG) – composed of a community of Cypher vendors, researchers and users – has convened online to discuss and propose features and improvements to the Cypher query language. The oCIG governs change suggestions in the language by consensus, thereby transforming Cypher from a Neo4j-only language into an industry-wide query language.

Cypher is easy to learn.

It is inspired by SQL with the concept of pattern matching taken from SPARQL.

Cypher describes nodes, relationships and properties as ASCII art directly in the language, making queries easy to read and recognize as part of your graph data. Since it is highly legible, Cypher is also easy to maintain, simplifying application maintenance. 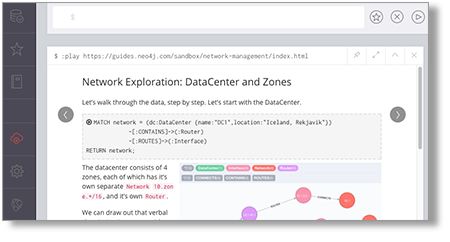 Neo4j Sandbox: Get Started with Neo4j and Cypher

The Neo4j Sandbox introduces you to the world of graph databases, with guided tutorials to run Cypher queries on sample datasets of popular use cases.

Cypher serves a prominent role in the Neo4j Graph Platform, allowing you to use this simple-yet-powerful query language to integrate your work with all of the various tools and facets of the Graph Platform.

Cypher for Apache Spark™ is early-release software donated to the openCypher project and the Apache Spark community under an Apache 2.0 license.

Cypher for Apache Spark first distills graph datasets from the depths of your data lake. Then, it adds that data to graphs projected out of Neo4j, allowing you to save or snapshot the results as either a (new) real-time graph in Neo4j or as files back in HDFS – or both. The analytic possibilities of these combinations are endless.

Additionally, the Cypher for Apache Spark library introduces many new features in Cypher, including:

Lastly, the following features are in progress with the openCyper community, planned for future versions of Cypher implementations, including the Neo4j server and Spark editions of the language.

Questions about the Cypher graph query language? Contact Us.