MTR is a simple ICMP based test combining ping and traceroute. The following demonstrates usage of the MTR trace tool to diagnose network latency and packet loss in a Causal Cluster. The tool is commonly used on Windows via the WinMTR tool (https://sourceforge.net/projects/winmtr/), however this article describes its example usage via the unix terminal. Installation and various usage options are beyond the scope of this article. A good reference for these can be found at the linode website referenced at the end of this article.

Examples below describe usage on OSX only, but usage on other operating systems is very similar. 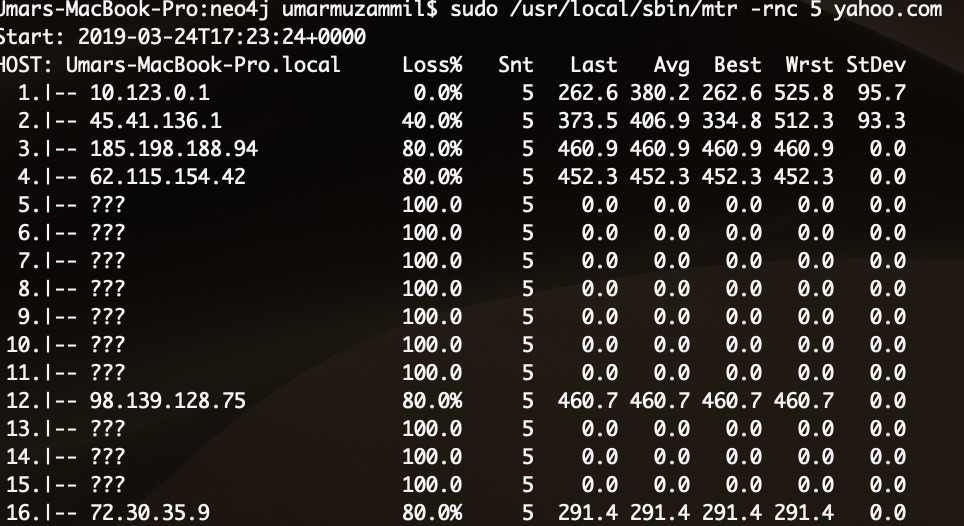 If a summary, rather than real-time response updates, is desired, execute:

sudo mtr -rwn -i 2 -c 5 <domain name or ip> > /User/<username>/Desktop/mtr.txt where i is the ping interval in seconds and in this case is 2. This outputs the trace report to an mtr.txt file at the above specified location.

Run mtr -P <tcp port> -T -w <destination ip> to generate a report. By default it sends 10 packets to the host. The Loss% column shows the percentage of packet loss at each hop. The Snt column counts the number of packets sent.

The next four columns Last, Avg, Best, and Wrst are all measurements of latency in milliseconds. Last is the latency of the last packet sent, Avg is the average latency of all packets, while Best and Wrst display the best (shortest) and worst (longest) round trip time for a packet to this host. In most cases, the average Avg column should be the focus. The final column, StDev, provides the standard deviation of the latencies to each host. The higher the standard deviation, the greater the difference is between measurements of latency.

When analyzing MTR output, you are looking for two things: loss and latency. An example test result of mtr -P 80 -T -w <ip> is shown below:

The question marks ??? appear when there is no additional route information. In the above example, there isn’t much information available from hops 9 to 16. When variable loss is reported between hops, it is advised to trust response times from later hops.

In the above example, there is 20% packet loss from hop 6 to hop 7 and 80% from hop 7 to hop 8. The destination also has 80% packet loss. This could lead to high latency (10s of seconds) and in this case, it seems to be down to hops 6, 7 and 8. Note that some packet loss is due to rate limiting. If there’s no packet loss on the destination, it means the connectivity is good. Notice the latency above averages at 86.4 ms. Hops 8 to 16 seem to have introduced around 100ms delay in this case.

For example, if one sets dbms.connector.bolt.listen_address=:7688 on the neo4j server side, it may be useful to test the network latency which will be added to query response times by executing the MTR trace from the server towards the client, e.g. as sudo mtr -rwn -i 2 -c 5 -P 7688 -T <ip of the client, or, another cluster member>.