Neo4j in the Cloud

Building on the previous Cypher guides, this guide shows how to write subqueries. Upon finishing this guide, you should be able to write and understand queries using this capability.

All of our examples will continue with the graph example we have been using in the previous guides, but include some more data for some of our later queries. Below is an image of the new graph.

To recap, each person could also have multiple IS_FRIENDS_WITH relationships to other people. This gives us a network of people, the companies they work for, and the technologies they like. 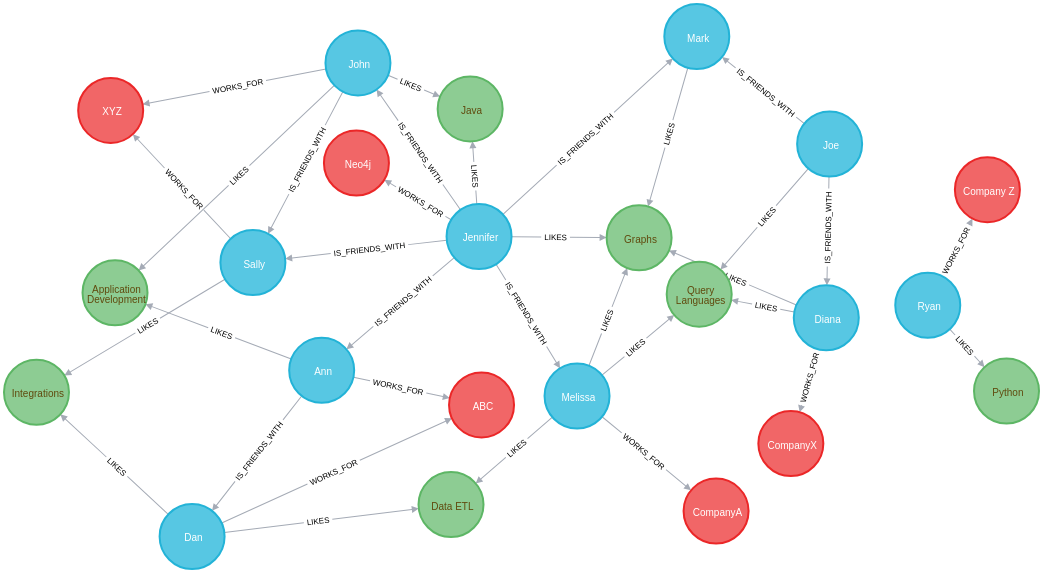 An introduction to Subqueries

In this guide we’re going to learn how to write queries that use both these approaches.

In the filtering on patterns section of the filtering query results guide, we learnt how to filter based on patterns. For example, we wrote the following query to find the friends of someone who works for Neo4j:

If we run this query in the Neo4j Browser, the following graph is returned: 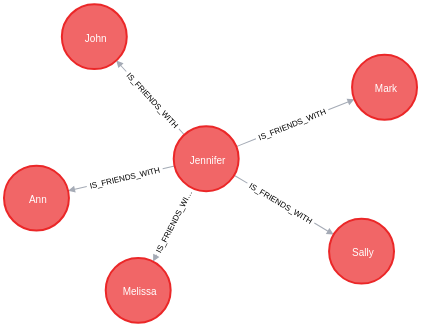 Existential subqueries enable more powerful pattern filtering. Instead of using the exists function in our WHERE clause, we use the EXISTS {} clause. We can reproduce the previous example with the following query:

We’ll get the same results, which is nice, but so far all we’ve achieved is the same thing with more code!

Let’s next write a subquery that does more powerful filtering than what we can achieve with the WHERE clause or exists function alone.

Imagine that we want to find the people who:

We aren’t interested in knowing what those technologies are. We might try to answer this question with the following query:

If we run this query, we’ll see the following output:

We can find people that like a technology, but we can’t check that at least 3 people like that technology as well, because the variable t isn’t in the scope of the WHERE clause. Let’s instead move the two AND statements into an EXISTS {} block, resulting in the following query:

Now we’re able to successfully execute the query, which returns the following results:

If we recall the graph visualisation from the start of this guide, Ryan is the only other person who works for a company whose name starts with “Company”. He’s been filtered out in this query because the only Technology that he likes is Python, and there aren’t 3 people who like Python.

Let’s say we want to write a query that finds people who like Java or have more than one friend. And we want to return the results ordered by date of birth in descending order. We can get some of the way there using the UNION clause:

If we run that query, we’ll see the following output:

We’ve got the correct people, but the UNION approach only lets us sort results per UNION clause, not for all rows.

We can try another approach, where we execute each of our subqueries separately and collect the people from each part using the COLLECT function. There are some people who like Java and have more than one friend, so we’ll also need to use a function from the APOC Library to remove those duplicates:

This approach works, but it’s more difficult to write, and we have to keep passing through parts of state to the next part of the query.

The CALL {} clause gives us the best of both worlds:

Our query using the CALL {} clause looks like this:

We could extend our query further to return the technologies that these people like, and the friends that they have. The following query shows how to do this:

We can also apply aggregation functions to the results of our subquery. The following query returns the youngest and oldest of the people who like Java or have more than one friend

We have seen how to use the EXISTS {} clause to write complex filtering patterns, and the CALL {} clause to execute result returning subqueries. In the next section, we will learn how to use aggregation in Cypher and how to do more with the return results.