Why the Latest “Cash for Crash” Scandal Should Worry Us All

Emil Eifrem of Neo Technology says Welsh Police have done a fantastic job breaking a huge car insurance fraud ring. But was it purely by luck they started the work at all?

The recent news that a criminal family may have netted as much as two million pounds out of a “cash for crash” scam shocks us all.

The culprits in question, the Yandells of South Wales, have been apprehended as the result of a highly-complex police investigation that exposed Wales’ biggest, most “highly organised,” motor insurance fraud known so far. I stipulate “known so far” deliberately as I’m about to explain.

The Yandell group became experts in the planning and perpetration of a scam called ‘cash for crash’ – the running up of a large number of insurance claims for exaggerated or even completely fictitious motor collisions and related ‘injuries’.

So slick was their operation that regular payments to them and their co-conspirators, often members of their own extended family network, came rolling in for sums of anything from a few thousand to £40,000.

As many as 83 people may have been involved, say Welsh Police.


Deception and theft on this scale is shameful. And it’s not a ‘victimless crime’ – as it is a prime factor in your car insurance costs increasing every year.

But what’s more shocking is that the authorities had no idea this was going on – and only stumbled on the fraud ring’s activities.

Once alerted, lawmakers did a sterling job of investigative digging, and shadowing the gang on Facebook and social media.

But if an officer hadn’t spotted a piece of paper with its handwritten instruction of ‘What to say to the insurance company,’ the Yandells would still be perpetuating their crime today.

Data Relationships Are the Key to Unlocking “Cash for Crash” Activity


The truth is that conventional methods of fraud detection simply can’t keep up.

We’re relying on antiquated technology – standard relational databases – to spot hidden networks and connections that fuel the Cash for Crash “industry”. IT analyst group Gartner, which is highly concerned about these types of fraud, has stated, “[We] don’t consider traditional technology adequate to keep up with criminal trends.”

Another huge factor is social media. The police were able to devote resources to tracking the gang over Facebook to work out who was who and how they were connected – but that was after the case had been initiated. They simply wouldn’t have been looking there otherwise.

So what is to be done?

The good news for insurers and the CPS is that graph databases are a new way of looking at the relationships between data points which is proving highly effective at spotting the hidden connections between ostensibly regular customers and what they might actually be more dishonestly up to. 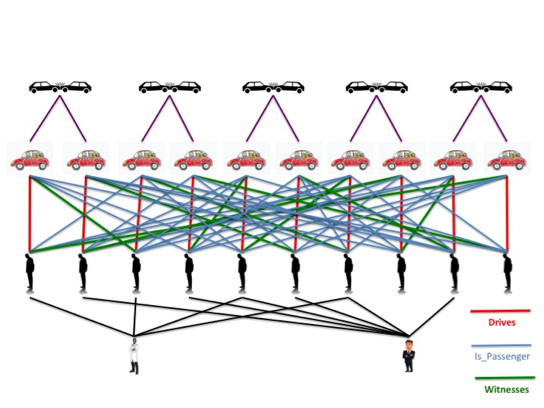 A 10-person insurance fraud ring depicted as a graph

A “Cash for Crash” Iceberg


Many experts believe graphs may be the only way to work with the complexity of Internet and social data to do just this, in fact.

We hope that Operation Dino, the South Wales Police’s brilliant operation to uncover this fraud ring is seen as the success it obviously is.

But we fear that without the use of tools like graphs, it will prove to be the tip of a criminal iceberg.

Emil Eifrem is the co-founder and CEO of Neo Technology, the company behind Neo4j, world’s leading graph database.


Learn how to harness the power of graph databases for your enterprise fraud detection efforts with this white paper, Fraud Detection: Discovering Connections with Graph Databases.