I’m incredibly excited to announce that the Neo4j team has just raised $36 million in a series D funding round.

I am glad to welcome Greenbridge Investment Partners to the graph of Neo4j investors, and I’d like to thank all existing investors who also participated in this round, including Sunstone, Creandum and Eight Roads Ventures. We’re all grateful for their confidence in both the graph category in general and in Neo4j in particular, and we’re glad to have them on board as we grow the graph space into the future. (Find all of the rest of the official announcement details here.)

2016 so far has been an incredible year for us.

Our product hit an adoption milestone of over 2.5 million downloads with an explosion in both depth and diversity of use cases across a growing number of verticals. On the commercial side, our team has brought in over 200 customers with one third of those being large enterprises. And the graph ecosystem itself has significantly blossomed with over 100 Neo4j partners and five straight years of growth for the GraphConnect conference.

Of course, this isn’t even the best news from 2016. In January, the tech market was in a rough spot (to say the least). Seeing that there were some uncertain waters, we set our sights on going cash flow positive: rigorously focusing on our customers and core business. I am very pleased that in only ten months, we are on track to accomplish that goal in early 2017. Nonetheless, we’re announcing a $36 million series D.

First, because the graph technology space has a huge amount of momentum right now. 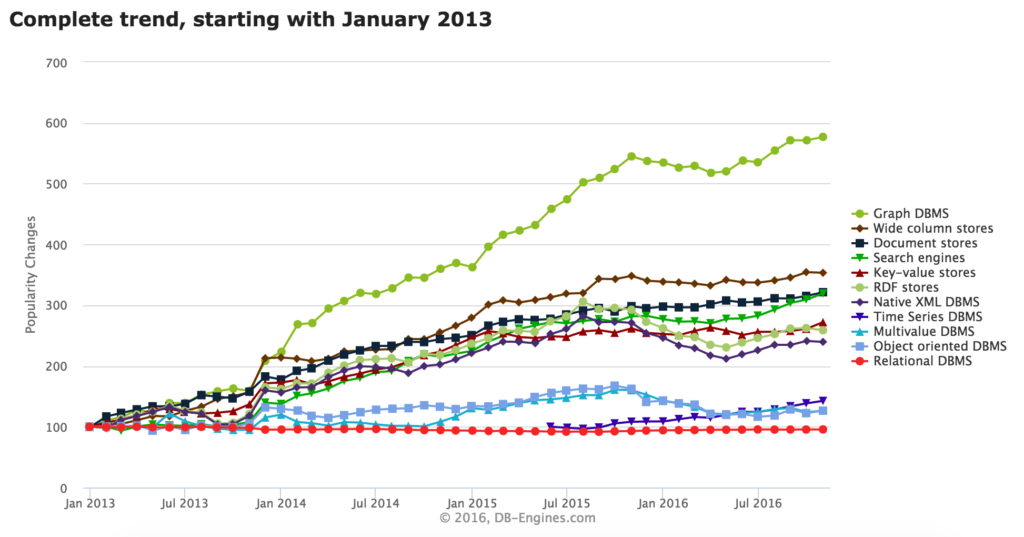 And the great news is that the space is growing! In the past 18 months, we’ve seen competing graph technologies announced or GA-ed from vendors both big and small.

So, while Neo4j is currently the indisputable leader in the graph technology space, now is the time to double down and cement our leadership as the category hits the elbow on the S-curve.

This rapid growth is because the business world is now seeing the impact of graphs. Whether it’s the societal impact of the Panama Papers, the government impact of NASA’s knowledge graph, or the commercial impact of four out of the world’s top ten retailers using Neo4j, it has become very clear that graphs offer a huge transformative potential. Organizations around the world are realizing that, in terms of data, a connected enterprise is more effective – and profitable – than a disconnected one.

We Know How to Grow

The second reason we’re accepting another round of funding is that, as an organization, we’ve reached a point where we, demonstrably, can handle capital efficiently.

I’m incredibly proud of what our team has accomplished in this regard. When we set out, we faced a challenging, if not impossible, task: create a database category from scratch.

While everyone else was being clumped inside the world of NoSQL technology, we had to create a new category in the midst of all that noise. Our team coined the term “graph database” and then had to learn to evangelize it and monetize it appropriately.

With only $45 million in total capital, that journey toward efficient monetization has been difficult but extremely rewarding. Today, enterprises contribute almost 75% of our revenue, keeping us on course to be cash flow positive early next year. Most importantly, we’ve done all this in a way where we can choose to take cash on our terms.

So, with an additional $36 million in the bank, what lies on the horizon for graphs? Let’s take a look at the five-year horizon, both the one behind and the one before us.

Five years ago, there was a Cambrian explosion of database technologies. The database world went from a handful to hundreds of options as the ecosystem and community experimented with data storage in various sizes, shapes and forms. It was a time for introducing and testing out the viability of new data models, and a number of those emerged: document, key-value, column family – and graphs.

Fast forward five years to today, even while the relational database has retained a strong presence, we have an incredible diversity of NoSQL database offerings from the niche and the middle-of-the-road to the mainstream and everything in between. (As of last week DB-Engines counts 310!) But this isn’t going to last forever.

When we look forward to the database landscape in 2020 – a long ways, but still close enough to touch if we reach – the world of data looks starkly different.

In 2020, the database world will be divided into three main segments. The first segment will be the relational world. The relational database will still be around and thriving. It won’t excite anyone with its growth numbers, but it will still have a lot of existing applications and use cases. Relational isn’t going away.

The second segment of the 2020 database world will be what was formerly known as the NoSQL space. In this segment, a handful of leaders – tier-one non-relational databases – will emerge. These tier-one players will all have significant commercial success and strong developer ecosystems. By 2020, adoption of open source databases will have outpaced their closed source competitors, and the tier-one vendors will all have open source products and communities. 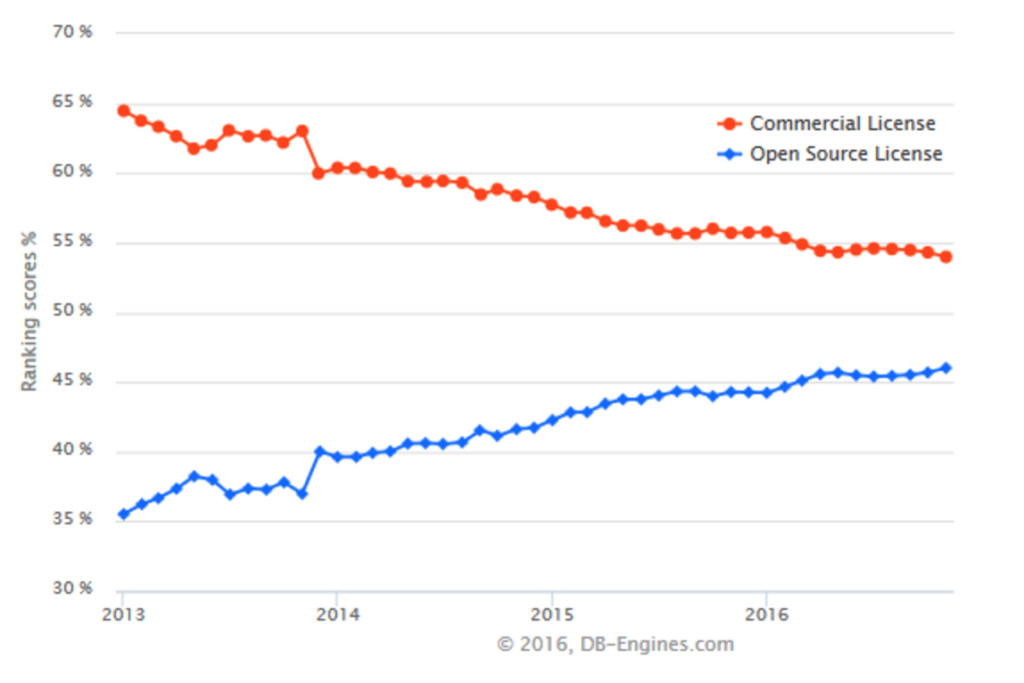 While each tier-one player will have their native data model (or “home turf” so to speak), they’ll all offer secondary functionality with other data models, creating significant use case overlap. Therefore the tier-one vendors will compete in a way they don’t today. Most of the time vendors will have a significant competitive advantage in use cases for their native model, but they will compete heavily across other use cases as well (e.g., MongoDB will find itself having to increasingly compete with Neo4j in the graph space).

The third segment will be tier-two non-relational databases that specialize in niche models that the tier-one vendors haven’t yet had a chance to embrace, such as time-series, geospatial databases, and the like. (This will be due to the technical complexity of retrofitting too many models into one kernel and storage engine, or simply due to priority reasons.) These niche players will have a much smaller commercial footprint because of their boutique models.

Let’s now double-click on the world of graphs. In 2020, I believe graphs will be a standard part of an enterprise’s infrastructure. Because graph-based applications will pervade entire organizations, Neo4j will be considered a default or standard much like Oracle or Microsoft SQL Server is for enterprises today. 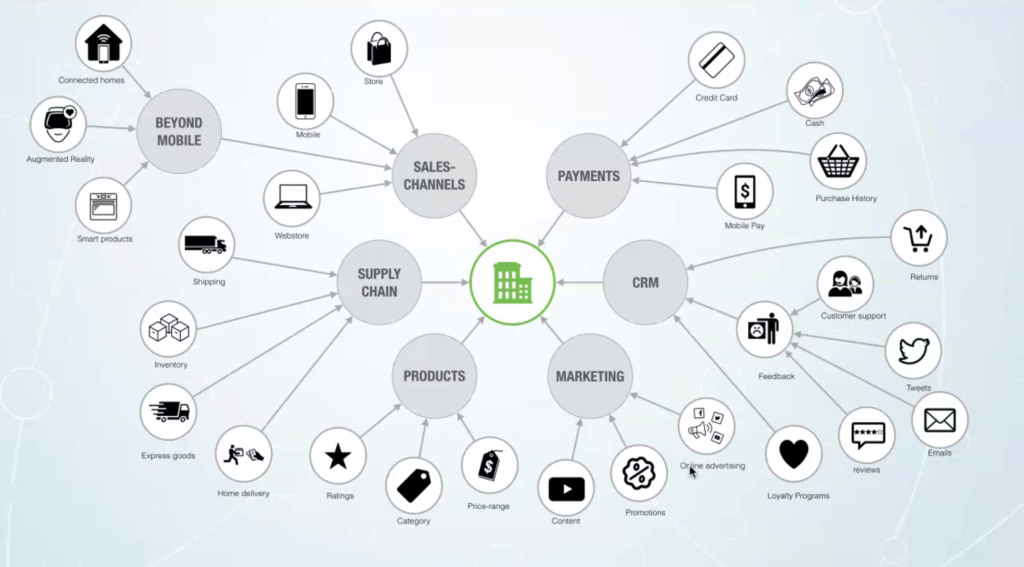 When we roll back five years to the present day, we’re seeing a rapid convergence around a few leaders in the NoSQL space, and with this series D funding round, our team is demonstrating that we are one of those leaders.

How We’ll Get There

So, how will we use this most recent round of funding to propel Neo4j and graph technology into the world of 2020? Here’s how:

First, Neo4j 3.1 has shown us that investing in the right features significantly pays off. In this case, it was a new clustering and security architecture, but there are still plenty of features we hope to add. In 2017 and beyond, we’ll invest in continued research and development of the Neo4j product (both enterprise and community editions) to ensure we continuously earn the title “The World’s Leading Graph Database.”

Second, we’re going to reach out more and more to the enterprise segment, building relationships and demonstrating the competitive advantage of graphs. However, this outreach will not be at the expense of the open source community. The philosophy of open source is important to us (and to me personally), especially in light of other vendors who significantly de-invest in the open source aspects of their product.

Third and finally, we’re going to build deeper relationships within the greater data technology ecosystem in order to bring a wider range of solutions to our existing users and customers. This means more integrations, more drivers and more intersections with other data and software communities. We believe in the power of relationships, and in 2017 we’ll be strengthening our relationships with communities outside our own.

The journey ahead will certainly be fraught with challenges, but I know the work will be worth it. That’s because graphs aren’t just a better way of looking at the world – they’re a better way to change the world.