Money laundering is among the hardest activities to detect in the world of financial crime. Funds move in plain sight through standard financial instruments, transactions, intermediaries, legal entities and institutions – avoiding detection by banks and law enforcement. The costs in regulatory fines and damaged reputation for financial institutions are all too real. Neo4j provides an advanced, extensible foundation for fighting money laundering, reducing compliance costs and protecting brand value.

In this fifth blog in our six-part series on using graph technology to fight money laundering, we discuss using graph algorithms for investigating entities and identifying high-risk payment chains. 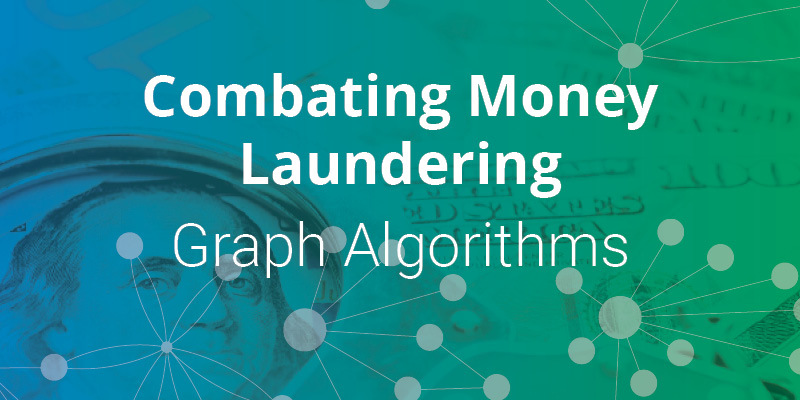 Graph algorithms dramatically increase the accuracy of entity resolution by providing information regarding relationships at the network level rather than at the individual entity level. Graph algorithms are applied globally across graphs or sub-graphs and leverage the information inherent in relationships. Those scores are then used to support tailored pattern matching that in turn feeds into machine learning pipelines for more accurate predictions.

The following script creates an in-memory graph named Entity of the account holders nodes that uses the ENTITY_RESOLUTION as relationships among these nodes and the confidenceFactor property as weights for these relationships. 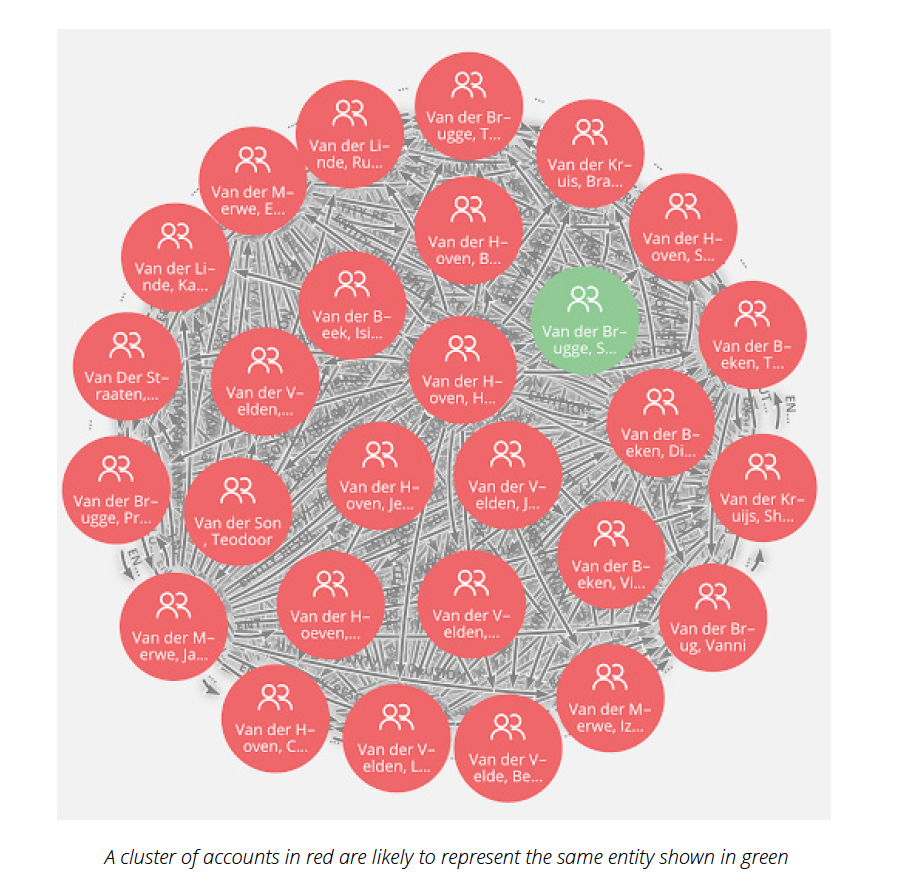 If there is a path between a customer and a high-risk end point, then Jaccard, Cosine or Overlap Similarity algorithms indicate how similar each path is to other paths from that specific customer to those high-risk endpoints. Then create a subgraph of paths and have weighted relationships representing similarities among the paths. Pathfinding and search algorithms identify payment chains and third parties layered between customers or transactions and other endpoints.

To illustrate, the following script loads an in-memory graph of money transfers between account holders.

On this in-memory graph, the following script executes Weakly Connected Components (WCC) to identify a cluster of account holders in a payment chain that high-risk accounts use to conduct money laundering.

Each customer has a property called amlNetwork. The WCC algorithm updates this property for every customer in the cluster. 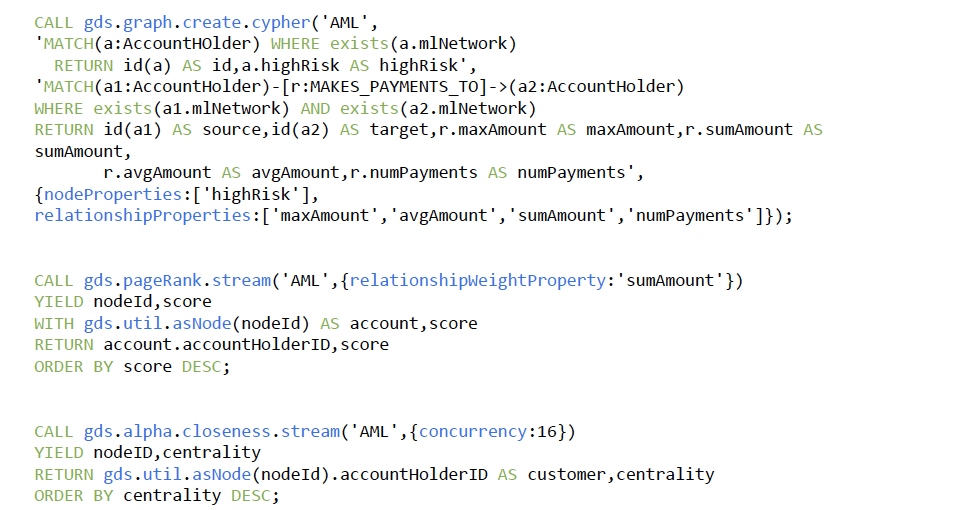 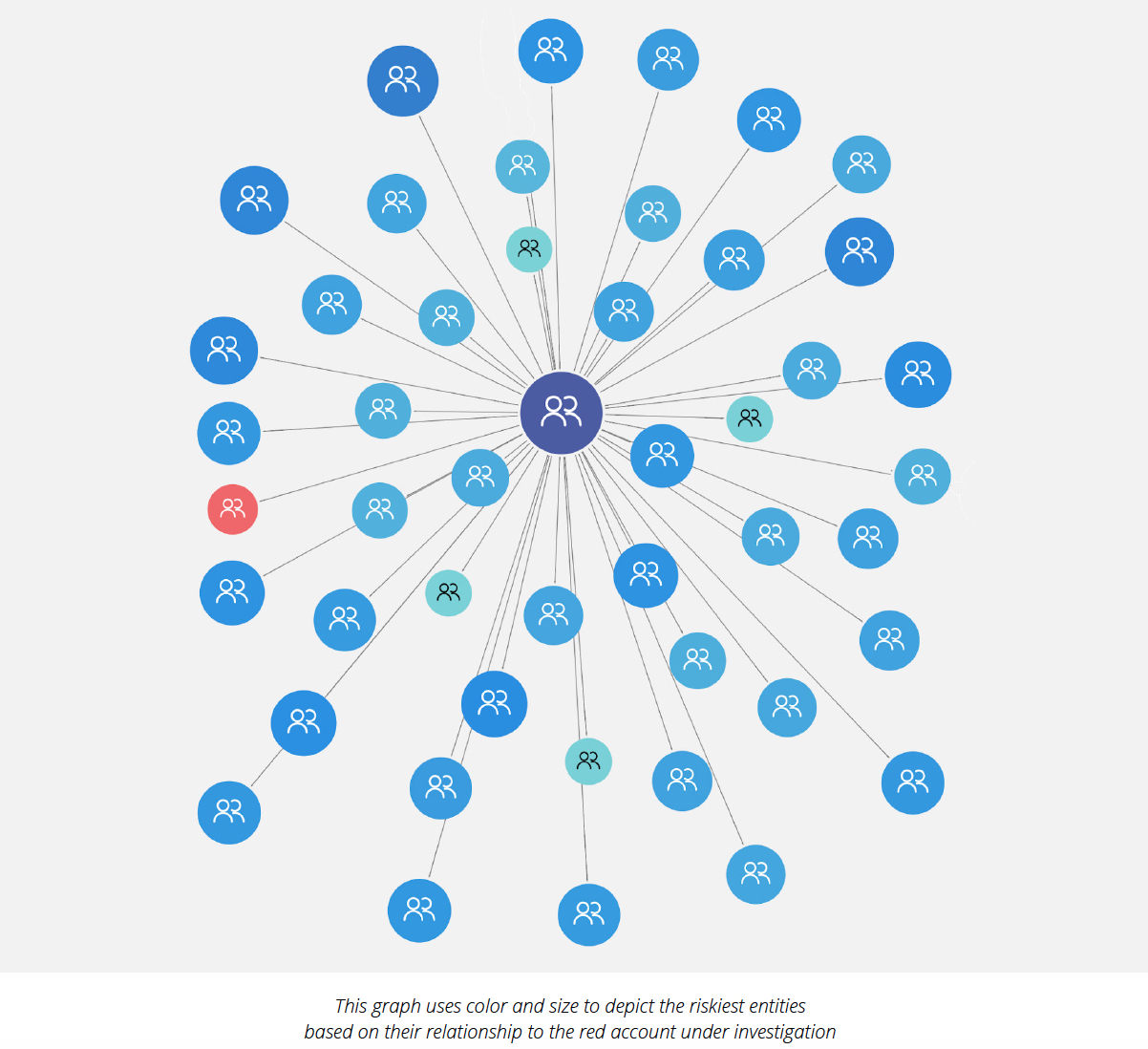 As we’ve seen, graph algorithms streamline important AML tasks such as entity resolution, the process of gathering a complete body of data about a particular item or object, and identifying high-risk payment chains.

Next week, in our final blog in this series, we’ll look at the exciting area of graph data visualization, showing views of money queries targeted to audiences from executives to analysts to data scientists and power users. We’ll also highlight the benefits compliance teams reap when using Neo4j.

Stop money laundering in its tracks. Click below to get your copy of How to Combat Money Laundering Using Graph Technology.

Get My Solution Guide

Darryl has extensive experience in data management working with semantic triple stores, NoSQL databases, columnar databases, relational databases, and database and application integration. Prior to Neo Technology, Darryl worked as a Global Account Manager at SnapLogic, the leading enterprise integration PaaS. Prior to that Darryl was a Strategic Accounts Director ... know more