Complex problems are perfectly suited to a native graph database like Neo4j, which fully reflects the reality of vast connected data. Interactions between all the compounds in medications need to be explored in real time and their implications must be crystal clear to physicians as they make decisions about prescribing new medications for their patients.

In this week’s five-minute interview (conducted at GraphTour Stockholm 2019), we speak with Amin Jalali, senior data scientist at Stockholm University, about research he and his team are conducting on how doctors respond to warnings about drug interactions.

What are you working on with Neo4j?

As a part of my work, we’re investigating how physicians use the input from drug recommendation systems when they add some sort of medicine to the patient’s drug list. The system tells them if there are bad interactions between the patient’s drugs or not.

Why are graphs good for exploring drug interactions?

Let’s say you go to a doctor, and you have previously been using one drug, and the doctor wants to add another drug. The doctor can see that the drug contains a substance that interacts with the previous drug, and note “Oh, there’s a bad interaction.” It might even be a life-threatening problem, and the doctor receives a warning and can change the drug accordingly. 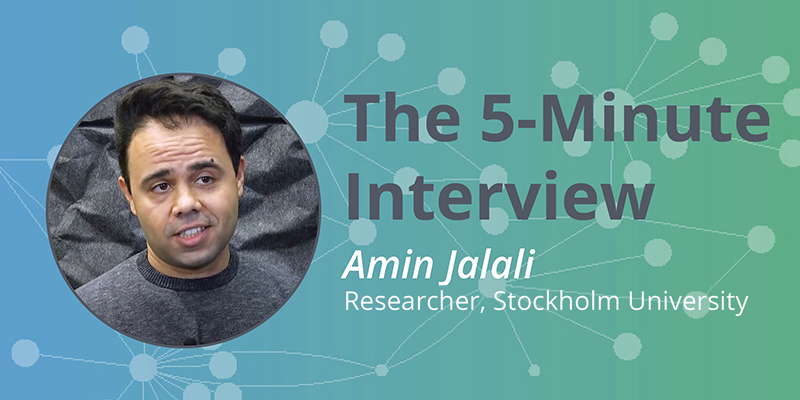 How has using Neo4j impacted the project?

I can say it affected the project a lot because without Neo4j, it would be difficult to explain how we are able to recognize that the interaction between two drugs was severe, for example.

Neo4j helps us to understand the context because the way that we store the data is closer to reality. We don’t translate the reality of these relationships into another layer like a transactional database, because then you lose some part of that reality.

We store the data close to what actually exists. And this helps us not only to understand the nature of the interaction, but also to explain it.

When we explain it to people and they say, “Aha! This drug has this substance that interacts with this one.” They see that visually, and it helps a lot with communication as well as with analysis.

Do you have any advice for people starting out in graphs?

I think they should use graph technology. You cannot see the benefits until you try it out. It’s not hard to do because Neo4j provides its software in different forms. For example, I use it as a Docker container, so I can easily use Neo4j without worrying about how it’s going to be served.

You can also develop your own algorithm, which is very interesting to work on, especially if you are in research.