Four Things You Didn’t Know About Doctor Who

Originally posted on Buzzfeed. Find your own Doctor Who trivia by querying our sample database.

Doctor Who is known as many things: a science-fiction institution, the stuff of nightmares for generations of British children and, for some, a route into graph databases!

As incongruous as it sounds the Doctor has helped numerous businesses into the world of graph databases. Back in the early days of Neo4J, my colleague Ian and I built a huge graph database to map the world of Doctor Who – we used this as a training aid for developers who wanted to better understand the power of the graph.


Eventually the training presentation was retired to make way more a more globally understood reference point but, mainly as a labour of love, we continued to update and add to the data set.

Why does Doctor Who lend itself so well to the graph? Because it has a great richness of characters and locations – and connections between them – going back five decades in our time while spanning he entirety of time in arbitrary order in the fictional universe. And this is what makes it such great material for a graph database.

Now, with Peter Capaldi becoming 12th incarnation of the Doctor we’ve dusted down the graph to search out some of the most interesting insights from the archive of 200 stories (and over 800 screened episodes, unfortunately not including those episodes lost to history).

Looking at the data through a graph allows us to focus on the relationships the Doctor has with enemies and allies alike.

Here is a rundown of our 4 most interesting findings:

1. Forget the Daleks and the Cybermen, the real battle is with the Master…

…with 33 appearances and nine incarnations, the Master has been the biggest thorn in the Doctor’s side.

2. Though the Daleks aren’t far behind…

…attempting to exterminate the doctor (and Earth) no less than 32 times. 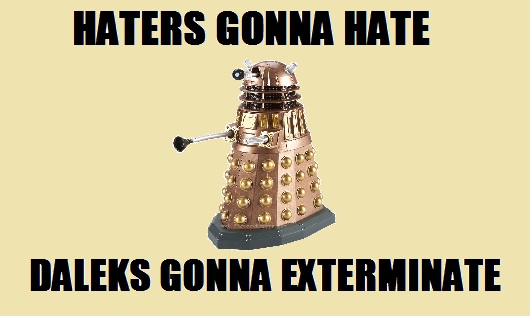 3. Stand by your man – when the Doctor needs help River Song is there…

…no wonder the Doctor married her – she’s been by far his most potent ally, appearing in 9 episodes.

4. It’s hard to separate his most loyal companions…

… with Amy Pond and Rose Tyler both notching up 31 adventures with the Doctor since he was rebooted in 2005.

But in the classic series it is Sarah Jane Smith and Tegan Jovanka who come closest to the honors with 27 and 24 outings respectively. Rory Williams is the highest placed man on list – traveling through time and space 23 times.

While analyzing the life and times of Doctor Who is certainly important work for fans, graph databases are more than just a tool for digging out trivia.

Graph databases make a significant impact on the way businesses explore their own information – often turning up new and unique insights from established data-sets or enabling new kinds of applications to be built. Understanding the relationships between different items – whether that is customers, infrastructure or delivery routes, or proteins – can often throw up suggestions for new ways of working, helping organisations to form closer links with customers or even providing a better overview of their own product portfolios and assets. While conventional relational databases can be coaxed into trying to do similar things, the model doesn’t scale because of the cost of joins. With graph databases you can time performance in milliseconds rather than minutes.

For example, Shutl, an eBay company, is using Neo4j to determine the quickest possible way to deliver an item from sellers to buyer within the same day. When planning routes on its previous, relational database it could take several minutes to crunch the data – now it takes a second, the Neo4j-powered system provides up to fifty different alternative routes.

For many organizations graph databases may be the Sonic Screwdriver they need to really unlock their big data.