This week we begin our exploration of Community Detection algorithms, with a look at the Strongly Connected Components algorithm, which locates groups of nodes where each node is reachable from every other node in the same group, following the direction of relationships. It’s often applied from a depth-first search.

The Strongly Connected Components (SCC) algorithm finds sets of connected nodes in a directed graph, where each node is reachable in both directions from any other node in the same set. It is often used early in a graph analysis process to give us an idea of how our graph is structured.

SCC is one of the earliest graph algorithms, and the first linear-time algorithm was described by Tarjan in 1972. Decomposing a directed graph into its strongly connected components is a classic application of the depth-first search algorithm.

When Should I Use Strongly Connected Components? 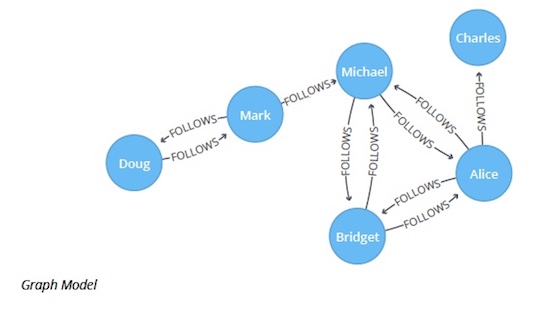 Now we can run Strongly Connected Components to see whether everybody is connected to each other. Execute the following query: 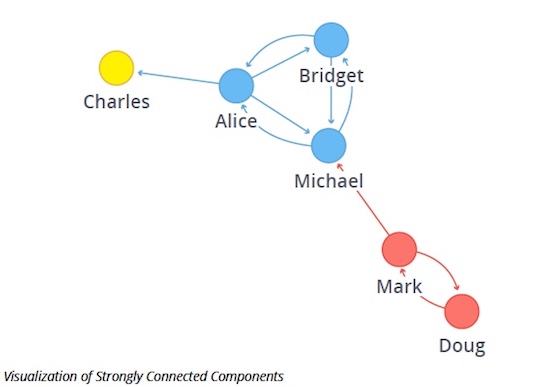 We have three strongly connected components in our sample graph.

The first, and biggest, component has members Alice, Bridget and Michael, while the second component has Doug and Mark. Charles ends up in his own component because there isn’t an outgoing relationship from that node to any of the others.

As we’ve seen, the Strongly Connected Components algorithm is often used to enable running other algorithms independently on an identified cluster. As a preprocessing step for directed graphs, it helps quickly identify disconnected groups.

Next week we’ll continue our focus on Community Detection algorithms, with a look at Weakly Connected Components.