In this week’s edition we watch Risa Myers’ NODES talk where she shares her experiences on teaching Neo4j to students.

Adam Cowley has produced a lot of new content around: taking advantage of multi database in 4.0 through a worked example, how to seed an instance of Neo4j inside a Docker container using a backup, and has built an early version of a Cypher Query builder for Node.js.

Estelle Scifo has released the latest version of neomap, and gives us an overview of the new features in it with her latest blog post.

I hope you have a fabulous weekend!

Lju and the Developer Relations team

Our featured community member this week is Thomas Silkjær. Thomas is a designer, developer, and data analyst with a passion for understanding blockchain technology, living in Aarhus, Denmark. He’s also Neo4j Certified Developer, a Neo4j Ninja, and a contributing writer for Forbes.

You might recognize Thomas from the presentation he gave last year on Exploring the XRP ledger in GraphXR or his articles on exploring the XRP data. Thomas is passionate about building and connecting the dots, just as much as he is in sharing his knowledge and helping others. We wanted to express our admiration and gratitude for his passion and contributions. Thank you, Thomas, for all that you do for the community.

PS. He’s recently left his company, after 15 years to explore new possibilities working in fintech, blockchain, and data analytics. He is currently working on the xrplorer project a Neo4j based tool with up to date information of the XRP (Ripple) ledger.

If you have any ideas for him, you can message him directly on the Neo4j Community Site.

NODES 2019: We are not just relational anymore: Teaching Neo4j as part of a database course

In this week’s video from the NODES 2019 conference, Risa Myers’ talks about how she has incorporated Neo4j on the syllabus at Rice University.


She identifies that the focus in a project should be on selecting the right tool for the job, and when thinking about how you store and query your data, this is also applicable. Risa describes the evolution of the course that she runs, and how it has changed over time to incorporate different database types, including Neo4j.

If teaching Neo4j has whet your appetite, do check out the Neo4j GraphAcademy University Program.

Tomaz Bratanic has recently written a blog post featuring how you can migrate from the Graph Algorithms library to its successor, the Graph Data Science (GDS) library, which was released this week as a 1.0 version, soon to be available in Neo4j Desktop.

He has prepared migration guides in the form of an Apache Zeppelin notebooks. Using examples from the Graph Algorithms book, Tomaz has produced 16 single graph algorithm notebooks with implementations in Apache Spark as well as in Neo4j. He also covers the link prediction analysis from the book, ported to the new library.

Don’t forget, if you haven’t already – do download your copy of the Graph Algorithms book whilst you can – it’s available for free download, but only until 15 April!

PSA: We are hiring!

Meanwhile he’s been keeping himself busy with the following topics:

Adam gives an example of how you can use the 4.0 multi database features through the example of building a Software as a Service (SaaS) company. He shows how you can build a lightweight control panel to automate the process of spinning up new databases.

If you want to take a backup of an existing database, and use it to seed an instance of Neo4j inside a Docker container, Adam got you covered too.

Last but not least, for those of you using Neo4j with Node.js, he’s put together an early version of a Cypher Query builder, available on GitHub. Please do let Adam know what you think!

See all of Adams articles

New version of Neomap with Routing 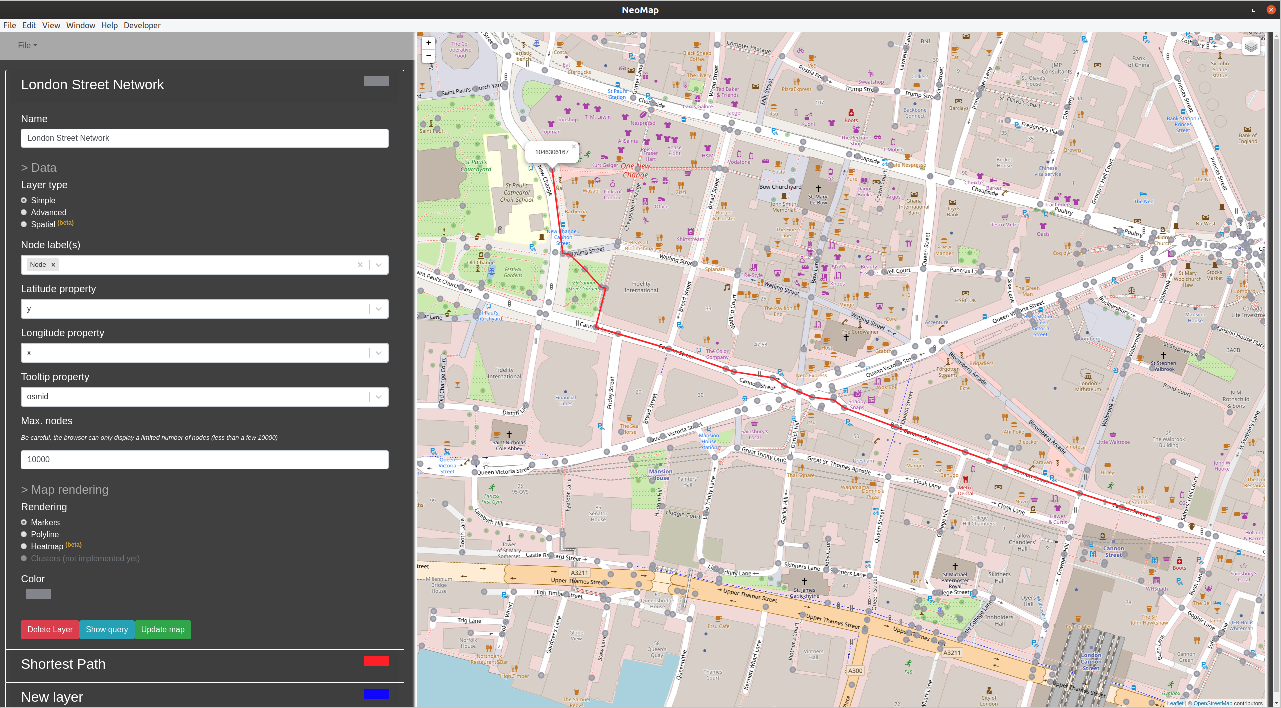 Estelle Scifo recently released 0.4.0 of neomap. If you’ve not come across neomap before, it is a Neo4j Desktop Graph App which allows you to visualize nodes with geographic attributes. You have the flexibility to mark certain artefacts on the map, based on what Cypher query you input into the application.

This is especially powerful when used in combination with the Graph Data Science library, as Estelle shows us in her latest blog post.

You can also read more about how neomap came to be, as Estelle’s (winning!!) entry to last year’s Global GraphHack competition.

Jim Chen has imported the Justices of the US Supreme Court in a Graph with their succession and nomination links to presidents. Really cool!

The Supreme Court of the United States as a graph database, with Justices as brown nodes, Presidents as green nodes, and appointment, promotion, succession, and the 17 historical periods/Courts associated with each Chief Justice shown through relationships. @mad_cat @tcjericho pic.twitter.com/FdDXHo82H0

Lju is a Developer Advocate in the Developer Relations Team at Neo4j. She enjoys educating folks with talks, articles and screencasts. Before that she was a member of Neo4j’s EMEA field team, and an Enterprise Information/Data Architect in a previous life. She is a data geek who is keen to ... know more