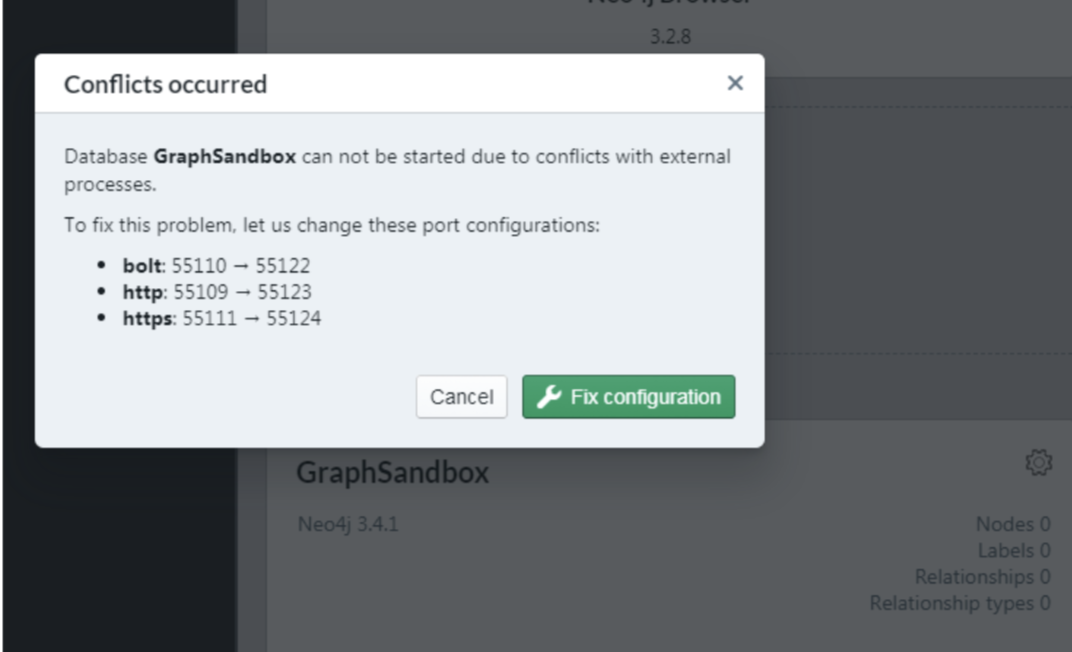 First thing to check is whether the default/configured http, https, bolt ports are allowed in the OS firewall and/or antivirus. The second check is to do an nc -l -p <port> which will check the port availability locally and also whether the port is already in use by another application/process. A variant of this is nc -v <hostname> <port> where neo4j server is on a remote instance. For windows, one can use the built-in telnet tool via the command prompt e.g. as telnet hostname.domain.com 7687.

Following above checks, it is worth attempting taking a backup of the .Neo4jDesktop directory at /Users/user/ /Library/Application Support/ on MacOSX or %USERPROFILE%.Neo4jDesktop\ and %USERPROFILE%\AppData\Roaming\Neo4j Desktop\ on Windows, then removing these directories, followed by a re-install of the desired Neo4j Desktop version and an OS restart.

If port conflict persists, the next step in troubleshooting is to check for potential issues with the OS’s hosts file. Hosts file on Linux and Mac OS is found at (/etc/hosts). Windows has a hosts file as well, on Windows you can find it in \Windows\System32\drivers\etc\. A quick check to test whether the OS is able to correctly resolve hostnames, one can execute in cmd tracert localhost, which should print a single hop. The only line in the hosts file is the following line, and we can comment out, delete or modify this line or file if needed . A sample output is:

If the trace route returns an empty result, try commenting out everything related to localhost in the hosts file. Then try running the command tracert localhost again. Following this, try starting a graph database in Desktop to see if the issue has been resolved. The line in hosts file should be commented out when testing in Desktop.

The above steps have been tested to alleviate port conflict issues encountered.