Welcome to this week in Neo4j.

This week we’ve got articles showing how to integrate Neo4j with Kibana, using jQAssistant from Pandas, and lots of releases of Neo4j and related projects. 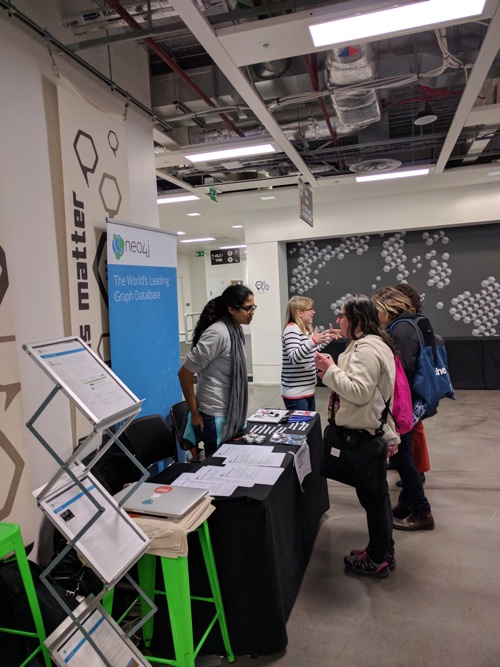 Praveena and Eve answering questions at the Neo4j booth

There were a variety of different talks and workshops including a Neo4j one run by Eve Bright, Praveena Fernandes, and me. Attendees had the chance to explore Buzzfeed’s TrumpWorld dataset and learn Neo4j in the process.

The next day we ran a similar workshop for people interested in journalism at journocoders in London. If you’d like to get your hands on the dataset, you can get up and running in a few minutes with your own TrumpWorld Neo4j sandbox.

There were a number of updates pushed to the TrumpWorld-Graph repository and Will Lyon released updated data and a browser guide for campaign financing in 2016 for his NICAR workshop.

It’s been a busy week for releases!

The drivers team have released the first versions of the 1.2 series for the Java and .NET driver. The Python one is planned for next week. The Javascript driver will follow two weeks later.

This release has removed some boilerplate code and introduce retry logic based on encapsulated “unit of work” operations. We released Neo4j 3.2.0 ALPHA06 as part of the early release program. This version contained some Windows fixes and supporting for whitelisting procedures. For all changes see the release notes.

New release of APOC – lots of goodies to play with

Activity on the APOC project

The APOC community have been busy as well. This week has seen the most commits since the surge in May/June 2016 when a lot of procedures were added.

There have been releases of APOC that are compatible with Neo4j 3.2.0-alpha06, Neo4j 3.1.2, and Neo4j 3.0.8. The documentation was also updated and is now available for each version.

Included in these releases are new date functions, a couple of cool new procedures for working with paths, as well as new functions for working with collections. Notable improvements in apoc.periodic.iterate allow now much faster operations and retries. Manual free-text indexes can now be kept up to date and the expire(TTL) functionality got more robust.

If you try any of these releases, let us know how you get on by dropping us an email devrel@neo4j.com.

In September 2016 Dmitriy Nesteryuk wrote an article explaining how web browsers could pre-render the next page a user might visit if they could predict what that page might be. He’s now created Sirko Engine which does this prediction in Neo4j.

I think searching for user journeys through web sites is a fascinating use of Neo4j and Dmitriy’s project reminded me about a blog post written by Nick Dingwell of Snowplow Analytics and how they’d used Neo4j to run path analysis on their own website.

So what’s there to look forward to in the world of graphs next week?